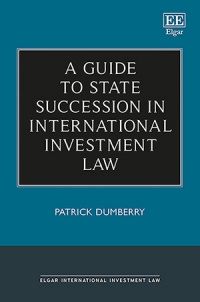 A Guide to State Succession in International Investment Law

9781788116602 Edward Elgar Publishing
Elgar International Investment Law series
Patrick Dumberry, Professor, Faculty of Law (Civil Law Section), University of Ottawa, Canada
Publication Date: 2018 ISBN: 978 1 78811 660 2 Extent: 552 pp
A Guide to State Succession in International Investment Law provides a comprehensive analysis of State succession issues arising in the context of international investment law. The author examines whether a successor State is bound by the investment treaties and State contracts which the predecessor State had signed with other States and foreign investors before the date of succession. Actors who are called upon to apply rules of State succession in investment arbitration cases will find this book a valuable source of practical guidance with strong theoretical foundations.

The book examines the legal consequences in the field of investor-State arbitration arising from the disappearance or the creation of a State, or from a transfer of territory between States. Specifically, it analyses whether a successor State is bound by the investment treaties (bilateral and multilateral) and the State contracts which had been signed by the predecessor State before the event of succession.

• Much-needed examination of the practice of States in the context of succession to bilateral, multilateral treaties and State contracts

• practical guidance on the application of the rules of State succession in investment arbitration cases, including when succession occurs during arbitral proceedings

• assessment of the theoretical reasoning behind previously unexplored issues in State succession.

Actors who are called upon to apply the rules of State succession in investment arbitration cases will find this book a valuable source of practical guidance. Researchers in the field of international investment law will also find this to be a compelling text, with strong theoretical foundations.
Critical Acclaim
‘Professor Dumberry’s treatise addresses a broad range of issues that might arise out of state successions in investment disputes in a comprehensive and comprehensible manner. One does not need to agree with all of his conclusions to appreciate the well-reasoned analysis and wealth of references to state practice and legal authorities, which will make this book indispensable reading for any
arbitration practitioner dealing with this complex and contentious matter.’
– Hanno Wehland, Journal of International Arbitration

‘A Guide to State Succession in International Investment Law offers original insight into a vastly under-appreciated aspect of international investment law, certainly among the most significant and growing fields of international law in recent years. This is a considerable achievement which is deserving of much attention and credit by international scholars and jurists alike.’
– David Collins, Journal of International Banking Law and Regulation

‘This book takes an apparently narrow topic and accords it an almost epic intellectual scale. The dissolution of States may not happen every day, but when it does the practical implications for affected investment treaties and government contracts will be found in this book. Its unique contribution is to combine deep research and thinking about one of the most inchoate (and under-explored) concepts of international law with practical problems and real disputes.’
– Noah Rubins, Freshfields Bruckhaus Deringer
Contents
Contents: Part A General Introduction 1. Concepts Part B State Succession to bilateral investment Treaties 2. Introduction 3. State practice regarding the continuation of predecessor States’ BITs 4. Different forms of consent by States for the continuation of BITs 5. Critical analysis of the solutions adopted by the Vienna Covention 6. BIT Arbitration cases involving State succession issues Part C State Succession to Multilateral treaties 7. The Continuity principle adopted under the Vienna Convention for secession and dissolution 8. One (Hypothetical) illustration of succession to multilateral treaties: the case of NAFTA and Quebec’s secession 9. State succession to the ICSID Convention Part D State Succession to State Contracts 10. State succession to acquired rights under contracts 11. The concept of State contracts and its unique characteristics 12. Modification of State Contracts by the Successor State 13. Succession to State contracts depends on what types of succession is involved 14. Succession to State contracts depends on whether a number of factors and circumstances are involved Part E Specific problems arising when State succession occurs during arbitration proceedings 15. Succession affecting the respondent State 16. Succession affecting the home State of the claimant investor and resulting in changes of nationality Part F General conclusion 17. General Conclusion Index

Negotiation and Dispute Resolution for Lawyers