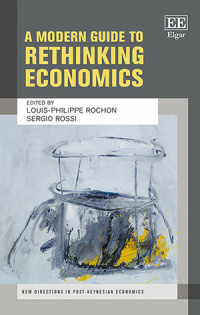 A Modern Guide to Rethinking Economics

9781784717209 Edward Elgar Publishing
New Directions in Post-Keynesian Economics series
Edited by Louis-Philippe Rochon, Full Professor, Laurentian University, Canada, Editor-in-Chief, Review of Political Economy and Founding Editor Emeritus, Review of Keynesian Economics and Sergio Rossi, Full Professor of Economics, University of Fribourg, Switzerland
Publication Date: 2017 ISBN: 978 1 78471 720 9 Extent: 464 pp
Since the beginning of the 21st century, there has been an unprecedented move towards ‘rethinking economics’. This book contributes to this worldwide discussion by providing readers at all levels with thoughtful contributions on a range of economic topics. The book includes chapters on rethinking fiscal and monetary policies, international trade, the role of the state, money, growth, the environment, development policies, energy, healthcare and more. Written by top experts in their respective fields, this book will be useful to students and faculty who want to not only rethink economics, but also to offer an alternative and coherent economic analysis to the orthodoxy.

More Information
Critical Acclaim
Contributors
Contents
More Information
Since the beginning of the twenty-first century, there has been an unprecedented move towards ‘rethinking economics’ due to the damages generated by the global financial crisis that burst in 2007-2008. Almost a decade after this crisis, policy is still unable to provide all citizens greater wellbeing or at least an encouraging economic future. This book addresses the urgent need to rethink economics by providing readers at all levels with thoughtful chapters on a range of relevant economic topics.

Editors Louis-Philippe Rochon and Sergio Rossi provide a first-class compilation of contemporary economic problems as well as a criticism of mainstream economics and economic policy, thereby offering a thorough investigation of these issues and policy solutions along alternative lines of thought. The book includes chapters on rethinking fiscal and monetary policies, international trade, the role of the State, money, banks, economic growth, the environment, development policies, energy, healthcare, and more. Special attention is paid to the importance of institutions and power relationships within the economic system.

Written by top experts in their respective fields, this book will be useful to students and faculty who want to not only rethink economics, but also to offer an alternative and coherent economic analysis to the orthodoxy. Economists and policy-makers will also find this book to be of much interest.
Critical Acclaim
‘The recent international student revolt against the unrealistic and apologetic nature of the economic theory that they are being taught has produced a call to “rethink economics”. In this impressive volume, 21 authors from seven countries on four continents do just that. They set out a convincing case for rethinking the fundamental conclusions and methodological basis of economic theory, the entire range of policy interventions by the State, and the nature of the global economic system and its (non-)regulation. No-one who is interested in the questions of economic growth and development, income distribution and social security, monetary and fiscal policy, the economics of energy and the environment, or the conduct of international trade and finance, can afford to overlook this important book.’
– John King, La Trobe University, Australia

‘A great guide to why the economic analysis which dominates textbooks has to be completely rethought to be able to understand the workings of the economy. It shows how that rethinking can be done across a wide range of issues. And provides ways to reformulate economic policies which work in the interests of the general populace.’
– Malcolm Sawyer, University of Leeds, UK

‘As the author of Rethinking the Theory of Money, Credit, and Macroeconomics, needless to say I am very much in sympathy with the aims and objectives of this project. The editors have a stellar track record, and once again have recruited a distinguished group of contributors, 21 in all, to comment on each individual topic. Each individual chapter heading contains the word “rethinking”. Thus we have “Rethinking Money” (as with my book), “Rethinking Income Distribution”, “Rethinking International Trade”, and so on. The intent is not to present a settled body of doctrine but to promote change on every front.’
– John Smithin, York University, Canada
Contributors
Contributors: A. Asensio, J.-L. Bailly, H. Bougrine, L. Chester, C. Gnos, S. Greppi, O.F. Hamouda, M. Llorca, R. McMaster, V. Monvoisin, R. O’Donnell, S. Parsons, E. Pérez Caldentey, J.-F. Ponsot, S. Pressman, L.-P. Rochon, S. Rossi, R.H. Scott, F. Ülgen, G. Vallet, R. von Arnim
Contents
Contents:

PART I CONCEPTUAL AND METHODOLOGICAL ISSUES
1. Rethinking the foundations of macroeconomics
Claude Gnos

2. Rethinking the economic role of the State
Hassan Bougrine