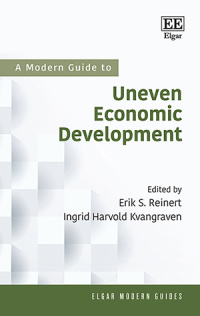 More Information
Critical Acclaim
Contributors
Contents
More Information
In contrast to neo-classical mainstream approaches to economics, this innovative Modern Guide addresses the complex reality of economic development as an inherently uneven process, exploring the ways of theorizing and empirically exploring the mechanisms with which the unevenness manifests itself.

Advancing experience-based theories in the debate of economic development, this Modern Guide provides a qualitative, holistic and nuanced understanding of economic inequality by uniquely combining explanations from a large number of academic fields. It covers a wide array of issues influencing wealth and poverty, technological innovation, ecology and sustainability, financialization, population, gender and geography, and considers the dynamics of cumulative causations created by the interplay between these factors. By looking at falling real wages, world income distribution, and refugees and migrants in poorer regions, it ultimately explains why wealth and poverty are so unevenly distributed globally.

The cutting-edge discussions in this Modern Guide will prove invaluable for students and scholars from a range of disciplines including economics and development studies. In today’s world of ‘single-issue management’, the alternative theories of mutual influence in this book will prove useful to policy makers working across a variety of economic fields.

Critical Acclaim
‘At the core of this edited book is the crucial place of imperialism in explaining uneven development. Erik Reinert is an outstanding development economist. In criticizing Eurocentric orthodox economics, which is expressed in mathematics, he, Ingrid Harvold Kvangraven, and the other authors reveal a notable knowledge of economics and the history of economic thought.’
– Luiz Carlos Bresser-Pereira, Fundação Getulio Vargas, Brazil

‘The boundless erudition of Erik Reinert animates this collection, augmented by the diverse expertise of many colleagues, and underpinned by their shared grasp of how and why the great voices of progressive political economy – List, Carey, Peshine Smith to name several – were stilled and forgotten as narrow dogmas came to rule the economic roost.’
– James K. Galbraith, The University of Texas at Austin, US

‘Uneven development is not an aberration: it’s been a central feature of capitalism through its history. This fascinating book provides many insights into this process: providing spatial and temporal analyses; identifying causes and consequences; linking with institutions and regulations; even showing how it can be associated with technological retrogression in some cases. Essential reading for anyone interested in economic development.’
– Jayati Ghosh, University of Masschusetts Amherst, US