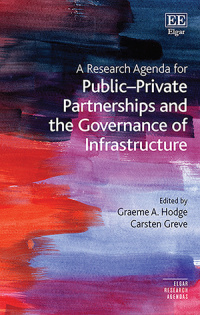 More Information
Critical Acclaim
Contributors
Contents
More Information
This timely Research Agenda examines the ways in which public–private partnerships (PPPs) in infrastructure continue to excite policy makers, governments, research scholars and critics around the world. It analyzes the PPP research journey to date and articulates the lessons learned as a result of the increasing interest in improving infrastructure governance. Expert international contributors explore how PPP ideas have spread, transferred and transformed, causing supporting markets to develop and mature.

Providing a multidisciplinary perspective on the topic, this thought-provoking Research Agenda proposes a range of future research directions, pointing towards the potential of fresh research approaches to PPP, the adoption of new theories and intellectual lenses, better balancing of public–private interests, and stronger public governance across what has now become a global phenomenon. It lights the way to diverse research frontiers ranging from financialization to psychology and behavioural science, as well as the continuing prominence of public administration, politics, economics, planning and law.

A Research Agenda for Public–Private Partnerships and the Governance of Infrastructure will be an enticing read for students and scholars of regulation and governance, public management and administration, politics and economics as well as industry professionals across the domains of public policy, infrastructure and city planning.

Critical Acclaim
‘Public–private partnerships have been a major development in public sector reform around the world in recent decades – but their role remains hotly contested. In this book, Carsten Greve and Graeme Hodge, as major contributors to the field, bring together leading scholars to provide an in-depth survey of current research into PPPs and key avenues for future research. With its outstanding analytical depth and comprehensive range of topics, it offers an indispensable guide for both researchers and government policymakers.’
– Tony Bovaird, University of Birmingham, UK

‘The world of PPPs and infrastructure governance is perilously complex, but this must-read book is the key to unlock the evolution of and momentum behind the global research agenda. Reading the individual contributions, I felt thrilled, impressed and humbled. Thrilled about the quality and diversity of research from long-established and newer authors. Impressed by the combination of fine eyes for detail and the identification of overarching themes, all explained in reader-friendly language. Humbled by the multitude of research challenges that remain.’
– Professor Emerita Pam Stapleton, The University of Manchester, UK

‘This edited volume makes a major contribution to the literature on public–private partnerships (P3s). Utilizing both cross-national and interdisciplinary approaches, the book assesses the current state of P3 research and suggests new avenues for future enquiry.’
– Professor Lawrence Martin, University of Central Florida, US

PART I INTRODUCTION
1 The PPP research terrain in a contested era 3
Carsten Greve and Graeme A. Hodge
2 Theories of public–private partnerships 35
Erik-Hans Klijn
3 The use of research methods in public–private
partnership research 55
Rianne Warsen

PART II NEW FRONTIERS IN A CONTESTED WORLD
4 Public–private partnerships in an economist’s eye:
a gleam or a beam? 85
Dmitri Vinogradov and Elena Shadrina
5 New frontiers in the politics of public–private
partnerships 105
Anthony M. Bertelli and Eleanor F. Woodhouse
6 Psychological and ontological research on PPPs:
what is PPP doing to us? 117
Sophie Sturup
7 What can behavioural science teach us about
the policy settings for privately financed public
infrastructure? 131
Sebastian Zwalf
8 A public turn in the governance of infrastructure 151
Lene Tolstrup Christensen and Carsten Greve
9 New frontiers in planning: city building through
public–private partnerships? 163
Matti Siemiatycki
10 New frontiers of PPP law 179
Christina Tvarnø and Sarah Maria Denta