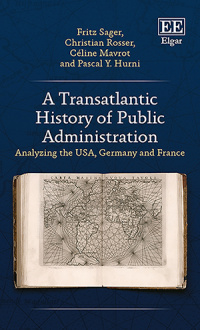 A Transatlantic History of Public Administration

Analyzing the USA, Germany and France

More Information
Contents
More Information
Intellectual traditions are commonly regarded as cultural variations, historical legacies, or path dependencies. By analyzing road junctions between different traditions of Public Administration this book contests the dominant perspective of path-dependent national silos, and highlights the ways in which they are hybrid and open to exogenous ideas.

Analyzing the hybridity of administrative traditions from an historical perspective, this book provides a new approach to the history of Public Administration as a scientific discipline. Original and interdisciplinary chapters address the question of how scholars from the USA, Germany and France mutually influenced each other, from the closing years of the 19th Century, up until the neo-liberal turn of the 1970s. Offering a thorough analysis of the transatlantic history of Public Administration, the conclusion argues that it is vital to learn from the past, in order to make Public Administration more realistic in theory, as well as more successful in practice.