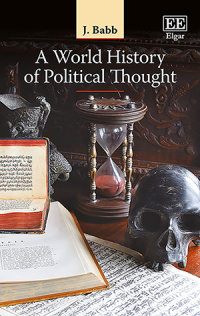 9781786435521 Edward Elgar Publishing
J. Babb, University of Newcastle, UK
Publication Date: 2018 ISBN: 978 1 78643 552 1 Extent: 544 pp
A World History of Political Thought is an outstanding and innovative work with profound significance for the study of the history of political thought, providing a wide-ranging, detailed and global overview of political thought from 600 BC to the 21st century. Treating both western and non-western systems of political thought as equal and placing them as they should be; side by side.

Outlining a methodological approach to enhance the study of comparative political thought, this book covers key political thinkers throughout history, analyzing the works and influence of both men and women around the world. With its chronological narrative of the development of ideas and contrasting the key concepts and the contexts in which they grew, this history unfolds as a readable and engaging story of different civilizations as they evolved and, in an increasingly connected world, competed.

Critical Acclaim
‘In his ambitious A World History of Political Thought, Babb locates the “foundational thinkers” about politics between 600 and 400 BCE. His key figures were Buddha, Confucius and Socrates, though we know most about the thinking of these three remarkable individuals through the writing of their followers, not themselves. The first identifiable “schools” of political thought, Babb suggests, emerged between 400 and 250 BCE, though he wisely warns that it is essential to be wary of “neat classification” distorting the “messy reality of the emergence of ideas”.
Ken Booth, International Relations