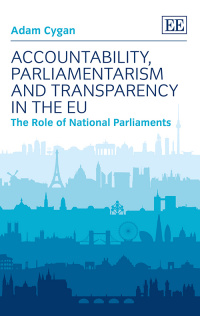 Accountability, Parliamentarism and Transparency in the EU

The Role of National Parliaments

More Information
Critical Acclaim
Contents
More Information
This accessible and detailed book takes an interdisciplinary approach in exploring the position of national parliaments in the EU polity and in particular their position within the EU governance framework.

Accountability, Parliamentarism and Transparency in the EU will strongly appeal to academics, parliamentarians/parliamentary officials working in EU affairs, as well as EU civil servants.
Critical Acclaim
‘It was a great pleasure to find such a rich analysis of the role of national parliaments in the EU. What I particularly like - and what proves to be particularly fruitful – is the combination of perspectives; the EU law and national constitutional perspective – including a comparative dimension, the perspective that explains the role of national parliaments in the EU from past to present (and even near future) and last but not least, the perspective of the interaction between the legal frameworks and the political reality. There is every reason to congratulate Adam Cygan wholeheartedly on this book.’
– Ton Van Den Brink, Europa Instituut Utrecht, The Netherlands

‘One of the most outstanding specialists on the role of national parliaments in the EU has produced another impressive book about this dynamic topic. It provides an illuminating overview of current practices, it sharply analyses the legal status quo, and it brings theoretical depth to the topic in multiple perspectives.’
– Olaf Tans, Amsterdam University College, The Netherlands
Contents
Contents: Introduction 1. National Parliaments, Accountability and Transparency in a European Perspective 2. European Integration and Deparliamentarisation 3. National Parliaments in the EU Treaties 4. The Ordinary Legislative Process and National Parliaments 5. Subsidiarity as a Regulatory Principle in EU Law 6. Subsidiarity Control after Lisbon 7. Accountability and Legitimacy in a Multi-Level Context 8. National Parliaments after Lisbon: A New Dawn of Accountability or Remaining on the Periphery? Bibliography Index
Add to Wish List
eBook for individuals
978 1 78254 865 2
From £25.00
Click here for options
eBook for library purchase
978 1 78254 865 2
View sample chapter and check access on: