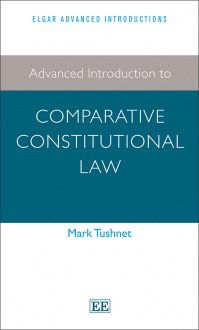 This authoritative study investigates constitution making, including the problem of unconstitutional constitutional amendments; recent developments in forms of constitutional review, including ‘the battle of the courts’; proportionality analysis and its alternatives; and the emergence of a new ‘transparency’ branch in constitutions around the world. Throughout, the book draws upon examples from a wide range of nations, demonstrating that the field of comparative constitutional law now truly encompasses the world.

Presenting a unique position on key issues about constitutional design and structure, this timely introduction will serve as an excellent resource for students and scholars of comparative constitutional law. Political scientists interested in comparative politics will also find the book a useful point of entry to this fascinating field of study.

Critical Acclaim
'Tushnet provides an authoritative review of the growing literature on comparative constitutional law. . . This book, however, is much more than a review of the existing literature and is a must read for both newcomers and those with more experience in the field.'
– H. Shambayati, Florida Coast University, Choice

‘Professor Tushnet provides an insightful overview of cutting-edge issues arising in comparative constitutional law. From changes in the conception of the separation of powers to approaches to the adjudication of the limits on fundamental rights, Tushnet offers both a snapshot of the current debates as well as a critical engagement with them. The book manages to accomplish the daunting feat of appealing to the serious scholar of comparative constitutional law as well as being accessible to those who are beginning their exploration of this field. It also fuses recent scholarship in political science literature and constitutional law in an illuminating combination.’
– David Bilchitz, University of Johannesburg and Director, SA Institute for Advanced Constitutional Law, South Africa

‘This work is a most welcome addition to the rapidly growing literature on comparative constitutional law. Mark Tushnet has drawn on his considerable knowledge of a wide variety of constitutional arrangements, coupled with at least a decade of reflection on current practice and likely trends, to prepare what is accurately described as an ‘Advanced Introduction’ to the field. The book is organised around four key themes, each of which is analysed through the lens of structure: constitution-making, constitutional review, rights analysis and government. The result is a useful blend of substantive knowledge and critical analysis. The work makes comparative constitutional law eminently accessible to relative newcomers to the field. Experienced comparativists will also find that it offers insights, however, as they grapple with familiar methodological questions.’
– Cheryl Saunders, Melbourne Law School, Australia

‘Advanced Introduction to Comparative Constitutional Law by Mark Tushnet is a short book that packs a great deal for different audiences and should be an indispensable resource for students as well as scholars in this rapidly expanding field. On one level, the book provides a clear and succinct introduction perfectly fit for the novice. On another level, Tushnet provides a magisterial compact synthesis of the major issues debated in the field that is bound to enlighten and provoke the specialist.’
– Michel Rosenfeld, Cardozo School of Law,Yeshiva University, US

‘With this brilliant, well-composed book, Mark Tushnet once again demonstrates his eminent scholarship and his unique combination of constitutional theory and realism. He presents a fascinating conversation among the leading voices in the field and illuminates some of the standard themes and problems of comparative constitutional law [constitution-making, judicial review, rights and structures of government]. This is an “Advanced Introduction” and more: an elegantly written summary of liberal constitutionalism.’
– Günter Frankenberg, Goethe University Frankfurt, Germany