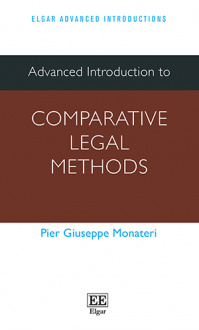 Critical Acclaim
‘Monateri’s book is an invaluable addition to our field, because he provides anyone researching comparative law with a further strategic device, ie the staging of the comparative-law methodology within a broader context so as to nurture our legal engagement with the real world avoid bracketing our research in ideological reconstructions imposed from above.’
– Matteo Nicolini, Revista General de Derecho Público Comparado

‘This magisterial study shows a deep understanding of the methods of comparative law which will be useful to veterans in the field and yet accessible to newcomers. Monateri achieves the difficult task of presenting the approaches of each scholar faithfully while weaving them into a synthetic account of the development of comparative law that places each in the intellectual and political context of its day.’
– James Gordley, Tulane Law School, New Orleans, US