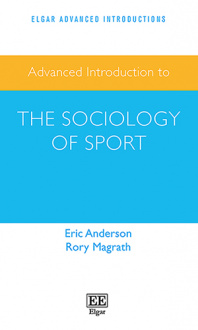 Advanced Introduction to the Sociology of Sport

This Advanced Introduction to the Sociology of Sport highlights the relationship between sport and violence, brain injury, social class, sexual minorities, gender, and race. Eric Anderson and Rory Magrath expertly draw on a range of scholarly evidence to outline how these issues intersect with contemporary sports culture.

This book provides essential reading for scholars and students in sports science, sociology and public policy.
Critical Acclaim
‘A fascinatingly constructed and informative introductory text that draws on prominent sociological areas of investigation in the context of sport. At a time when social issues in sport are a prominent feature of social, cultural, and political debate, this book will be of significant value for students, researchers, and other interested parties in analysing the important role sport plays in society as we move through the 21st century.’
– Jamie Cleland, University of South Australia

‘The Advanced Introduction to the Sociology of Sport is an important addition to scholarship in the areas of sports studies and the social sciences. Drawing on many years of research, Anderson and Magrath tackle some of the most pressing and divisive issues in sport. This book is therefore a must-read for students and scholars who wish to further their understanding of the constantly evolving relationship that exists between sport and society.’
– Richard Elliott, Global Institute of Sport, UK

‘Anderson and Magrath challenge readers to critically examine the realities of organized sports and the narratives created to portray them in positive terms. As the authors deal with seven important issues in the sociology of sport, they introduce concepts and theories that constitute the core of the field. When asking critical questions, they provide historical and cultural context as well as summaries of relevant research findings. The outcome is an informed critical consciousness for making sense of sports as social phenomena in the world today.’
– Jay Coakley, University of Colorado, US