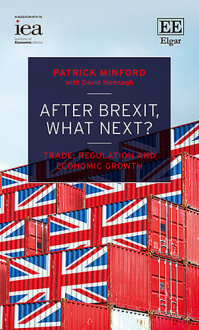 Explaining the numerous benefits of free trade after Britain’s exit from the EU, and challenging the anti-Brexit argument, Patrick Minford builds on his extensive research into economic modelling to quantify the effects of Brexit and propose policies for the aftermath. Laying out an agenda for replacing social interventionist EU regulation with a robust free market framework, Minford proposes a radical tax reform programme to broaden the tax base and flatten marginal rates. This incisive book looks to the future of the UK beyond Brexit, addressing the effects of coronavirus and proposing an avenue of policies for recovery.

Featuring key empirical analysis and insightful arguments, this book will be crucial reading for economists and policymakers investigating and overseeing the future of UK economic policy. It will also benefit scholars of economics and political economy, particularly those interested in tax reform programmes.

Critical Acclaim
‘Brexit offers the UK the opportunity to shake off the shackles of its EU past and rejuvenate its economy. In this book, Patrick Minford and David Meenagh set out the reforms needed – deregulation, free trade, and fiscal and monetary reform – to make Brexit a success. More markets, less government. UK policymakers should adopt After Brexit, What Next? as their canonical text.’
– Kevin Dowd, Durham University, UK
Contents
Contents: Preface 1. Introduction and summary PART I RESTORING BRITAIN’S COMPETITIVENESS THROUGH FREE
TRADE AND REFORMS OF THE TAX AND REGULATORY SYSTEM 2. The trade effects of Brexit on the UK economy 3. The costs of EU regulation 4. An agenda for tax reform PART II SUPPORTING BRITAIN’S ECONOMY THROUGH FISCAL AND MONETARY POLICY 5. Fiscal and monetary policy for the post-Brexit world 6. Reforming monetary policy for a normal future 7. Fiscal rules and the new fiscal programme 8. Public spending within the new fiscal programme 9. Conclusions Index
Add to Wish List
eBook for individuals
978 1 83910 307 0
From £16.80
Click here for options
eBook for library purchase
978 1 83910 307 0
View sample chapter and check access on: