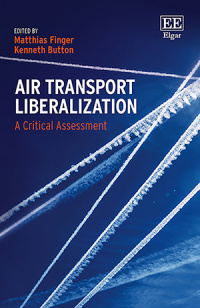 More Information
Critical Acclaim
Contributors
Contents
More Information
This groundbreaking book offers a critical and wide-ranging assessment of the global air transport liberalization process over the past 40 years. This compilation of world experts on air transport economics, policy, and regulation is timely and significant, considering that air transport is currently facing a series of new challenges due to technological changes, the emergence of new markets, and increased security concerns.

The book initially explores liberalization within various geographical markets such as the United States, Australia, Ireland, the European Union, China, India, Latin America, and Africa. It expands upon this by addressing the main concerns that were initially leveled against air transport liberalization, including those involving safety, social services, market concentration, and the domination of hub airports as well as market instability.

This analysis of air transport and its regulation will be of interest to aviation professionals, regulators, researchers, and students who are taking courses in air transport, economic regulation, and contemporary transport history.
Critical Acclaim
‘The 30th anniversary of the start of the liberalization of air transport in Europe, leading to the creation of the successful EU internal aviation market, is an excellent time to review the transformation of the aviation industry which has taken place throughout the world over the past few decades. This book brings together ten studies of how markets have changed in different countries. But it does more than that. It also reviews broader, generic topics such as safety, small community services and hub domination and the impact liberalization has had on each of them. Finally, it looks at future challenges, particularly in air traffic control and security. The wide range of topics covered helps to put the subject of air transport liberalization into context and reveals the full extent of the remarkable journey the aviation industry has taken in most people's lifetimes, as well as how much more there is to do.’
– Barry Humphreys CBE, Aviation Consultant, UK

‘Professors Finger and Button have assembled an impressive array of informative, insightful, and useful chapters that, taken together, offer a compelling endorsement for liberalizing air transport. Although a scholarly collection, there is much in this volume of direct relevance to aviation practitioners in both the private sector and governments.’
– John Byerly, Former Deputy Assistant Secretary of State and Principal U.S. Aviation Negotiator, US

Part I: Country and regional reports
2. Airline Liberalization in the US
James Peoples

3. Airline Deregulation in Canada and the Sustainability of Competition
David Gillen and William G. Morrison

18. Canada and USA: A Tale of Two ANSPs
Rui Neiva