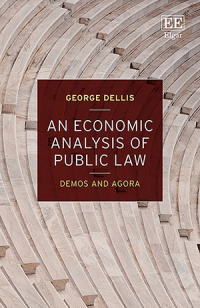 9781800375789 Edward Elgar Publishing
George Dellis, Professor of Public Law, Athens Law Faculty, Greece
Publication Date: 2021 ISBN: 978 1 80037 578 9 Extent: 320 pp
This original and insightful book considers the ways in which public law, which emphasises legality (the Demos), and economics, a science oriented towards the markets (the Agora), intertwine. Throughout, George Dellis argues that the concepts of legality and efficiency should not be perceived separately.

More Information
Critical Acclaim
Contents
More Information
This original and insightful book considers the ways in which public law, which emphasises legality (the Demos), and economics, a science oriented towards the markets (the Agora), intertwine. Throughout, George Dellis argues that the concepts of legality and efficiency should not be perceived separately.

An Economic Analysis of Public Law shows that combining these two disciplines allows for a more realistic view of decision-making and human action, leading to the creation of a ‘new’ public law that improves the functioning of non-consensual institutions. The book explores the ways in which this will lead to a better coexistence of Demos and Agora, especially in modern times of globalisation and competition among regulators. Chapters cover almost all aspects of the economic analysis of public law, such as the importance of economic analysis, design and decision-making for public institutions, and a general economic theory for public law and regulation.

Students, scholars and researchers in disciplines such as law and economics, European and public law in general, as well as the philosophy of law will find this book to be a valuable resource. It will also be a companion for anyone who is interested in understanding how the Law of the State and the State itself evolve in the current, globalised world.

Critical Acclaim
‘An Economic Analysis of Public Law: Demos and Agora argues persuasively that public lawyers need to learn economics to help them promote effective and publicly acceptable legal reform in democracies. Law is not merely a formal category. It ought to help structure policy responses, both fairly and efficiently, in the face of scarcity, conflicting interests, and imperfect information. Especially in Europe, George Dellis’s important book ought to help frame the debate over the functional role of law.’
– Susan Rose-Ackerman, Yale Law School, US

‘A crystal clear explanation of how economic analysis can be applied to public law. And a brilliant demonstration of what it can contribute to the analysis of public law, in spite of the epistemological and even philosophical differences that separate economics from public law theory in their premises. A fascinating book, indispensable reading for anyone looking for an “advanced” approach to public law.’
– Jean-Bernard Auby, Emeritus Public Law Professor, Sciences Po Paris, France
Contents
Contents:
Preface
1. Public law and economics: a necessary encounter
2. What a lawyer needs to know about economics: a rational (?) eye on everything
3. Economic analysis of public law: to the Coase theorem and beyond
4. To be or not to be? A general economic theory for public
5. Principles and methods for increasing efficiency in public law
6. Games of public power: what economics teaches us about constitutions
7. Between freedom and paternalism: an economic analysis of fundamental rights and the limits of public intervention
8. Modernising the demos: institutional architecture and procedural mechanics in public law
9. Economic analysis and the resolution of public law disputes: the scales, the sword and the blindfold of justice
10. The ascent of a new and efficient public law
Bibliography
Index
Add to Wish List
eBook for individuals
978 1 80037 579 6
From £25.00
Click here for options
eBook for library purchase
978 1 80037 579 6
View sample chapter and check access on:

The Economic Analysis of Civil Law

Advanced Introduction to Law and Psychology