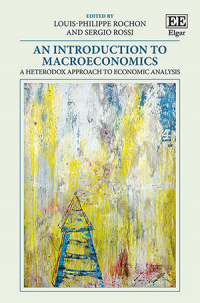 A Heterodox Approach to Economic Analysis

9781782549369 Edward Elgar Publishing
Edited by Louis-Philippe Rochon, Full Professor, Laurentian University, Canada, Co-Editor of Review of Political Economy and Founding Editor Emeritus, Review of Keynesian Economics and Sergio Rossi, Full Professor of Economics, University of Fribourg, Switzerland
Publication Date: July 2016 ISBN: 978 1 78254 936 9 Extent: 432 pp
This important new book introduces students to the fundamental ideas of heterodox economics. It is written in a clear way by top heterodox scholars. They offer not only a critique of the dominant approach to economics, but also present a positive and constructive alternative. Students interested in an explanation of the real world will find the heterodox approach not only satisfying, but ultimately better able to explain a money-using economy prone to periods of instability and crises.

More Information
Critical Acclaim
Contributors
Contents
More Information
This important new book introduces students to the fundamental ideas of heterodox economics, presented in a clear and accessible way by top heterodox scholars. It offers not only a critique of the dominant approach to economics, but also a positive and constructive alternative. Students interested in an explanation of the real world will find the heterodox approach not only satisfying, but ultimately better able to explain a money-using economy prone to periods of instability and crises.

Key features of this textbook include:

• Discussion of the crucial importance of money, banking and finance today

• Analysis of the roots of the 2008 global financial crisis

• A presentation of the features of sustainable development.

Students of economics at all levels can use this textbook to deepen their understanding of the heterodox approach, the fundamental roots of the 2008 global financial crisis and the need to rethink economics afresh.

Critical Acclaim
‘At last, this book is what was missing in heterodox economics. A full encompassing textbook written by great minds with a sole purpose: to allow students to discover the absurdity of the orthodox textbooks and the strength of heterodox economics. Through all the chapters, at last true economics is revealed. Rochon and Rossi have done heterodoxy a great service. This amazing book must be used by all those who teach heterodox economics, to form a new generation of young scholars.’
– Alain Parguez, Université de Franche-Comté, France

‘In this era of the student movement “Rethinking Economics”, very little rethinking has occurred in textbooks. Rochon and Rossi provide a set of thematic papers on macroeconomics that will give concerned students a palatable introduction to criticisms of mainstream macroeconomics and the foundations of alternative approaches. This volume provides a useful antidote to dogmatic “microfoundations” macroeconomics.’
– Steve Keen, Kingston University, UK

‘This volume fills a void in the economics literature by setting out, in crystal-clear prose, the heterodox approach to macroeconomic theory and policy. The authors provide a counterpoint to the orthodox approach that has led to global stagnation and over-indebtedness. In chapters that cross the full range of macroeconomic issues, renowned experts show why the insights of Keynes, Kalecki and Minsky, in particular, can point the way to a different future. Students and professional economists alike will want this volume on their bookshelf.’
– Gary Dymski, Leeds University Business School, UK

‘The editors of this enlightening textbook mean what they say. Originally, the term “orthodox” meant something like “right-thinking”. However, Rochon and Rossi are quite clear that in economics, the orthodox approach is “essentially wrong” and that orthodox economists, because of their wrong-thinking, do indeed bear a major share of the blame for the economic catastrophes that have befallen us. This is why there is a need for a heterodox approach. The editors and their distinguished contributors are equally adamant that what the economic analysis society urgently needs is monetary and macroeconomic analysis. They have no interest with the disastrous “microfoundations” dogma which is neatly skewered in the concluding chapter.’
– John Smithin, York University, Canada
Contributors
Contributors: R.A. Blecker, H. Bortis, A. Cencini, G.A. Epstein, R. Guttmann, O. Hamouda, R.P.F. Holt, J. Jespersen, J. King, M. Lavoie, J. McCombie, L.-P. Rochon, S. Rossi, M. Sawyer, M. Setterfield, M. Seccareccia, N. Tharnpanich, J. Toporowski

Introduction: The Need for a Heterodox Approach to Economic Analysis
Louis-Philippe Rochon and Sergio Rossi

PART I ECONOMICS, ECONOMIC ANALYSIS, AND ECONOMIC SYSTEMS
1. What is Economics?
Louis-Philippe Rochon and Sergio Rossi

Conclusion: Do we Need Microfoundations for Macroeconomics?
John King