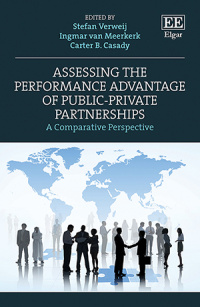 More Information
Critical Acclaim
Contributors
Contents
More Information
This timely book questions the premise that Public-Private Partnerships (PPPs) have a performance advantage over traditionally procured projects, an assumption that motivates policymakers worldwide to enter into such contracts. Taking stock of novel research comparing the differences in performance between PPP and traditionally procured infrastructure projects and services, the chapters in this book thoughtfully scrutinise this supposed advantage.

Adopting a quasi-experimental design, the book advances the evidence base on the performance advantage of PPPs. Insightful contributions from renowned scholars undertake an in-depth investigation of three key performance dimensions: cost, time, and service quality. Broad in scope, studies span countries in Asia, Europe, and South America, as well as a diverse range of policy sectors, including transport, healthcare, road safety, education, and sporting facilities. This comprehensive assessment produces several conclusions, but ultimately determines that evidence for a cost performance advantage remains mixed, while PPPs are proven to clearly outperform traditional alternatives in terms of time and service quality.

Empirical in focus and spanning multiple policy sectors, this incisive book will be an invaluable resource not only for PPP scholars, but also for researchers and practitioners involved in public administration, public management and policy, and infrastructure planning and delivery worldwide.
Critical Acclaim
‘Verweij, van Meerkerk and Casady have produced the definitive volume on a question that has haunted infrastructure delivery for decades: Do public-private partnerships offer real performance advantages relative to traditional delivery? This book provides insightful, applicable answers. Anyone – both scholars and practitioners – wishing to better understand that compelling question should use this as their standard reference.’
– Rick Geddes, Cornell University, US

‘In this inspiring volume, a great selection of well-known scholars tackle the most challenging question about PPPs in a convincing way: are public private partnerships indeed better than traditional procurement in terms of delivering on time, on cost and with good service quality? Studying cases from different continents and a range of relevant sectors with sound methodologies, this volume is a must-read for students and scholars studying PPPs, but also for practitioners and policy makers who want to go beyond the rhetoric and beliefs about the performance advantage of PPPs when deciding upon the best way of delivering economic or social infrastructure to society.’
– Koen Verhoest, University of Antwerp, Belgium