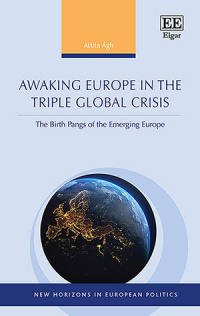 The Birth Pangs of the Emerging Europe

More Information
Critical Acclaim
Contents
More Information
This timely book examines the imminent dangers to European stability: the socio-economic crisis of global production that has reinforced structural inequalities; the climate crisis and its associated environmental degradation; and the onset and fallout of Covid-19. Placing the triple crisis in the context of EU, European and global geographies, it introduces a new conceptual framework to describe continuing systemic crisis and change in the EU.

Based on a rich and varied array of source material, Attila Ágh offers a new insight into the future of European politics through twin conceptual pillars: ‘Awaking Europe’, which describes a Re-United Europe that brings together its key regions; and ‘Emerging Europe’, which refers to the upgrading of EU mechanisms to shape Europe as a global player through multilateralism. Presenting an integrative analysis of the triple crisis and its management, it describes and dissects the overarching creative crisis of the EU and the major direction of the Union’s strategy for renewal.

Incisive and provocative, this book is critical reading for scholars and researchers in political science, European studies and economics, particularly those focusing on EU economic policy and the relationships between global powers. It will also benefit policymakers looking for innovative approaches to social investment and sustainable development.

Critical Acclaim
‘An excellent study of the profound challenges Europe is facing after the set of junctures in the last two decades. Attila Ágh punctually exposes the reasons for the European crisis at different analytical levels. Furthermore, he optimistically presents the remedies needed for the new, more Europeanised and socialised EU.’
– Ladislav Cabada, Metropolitan University Prague, Czech Republic

‘Against the background of far-reaching analysis of the multiple crises, paradoxes and systemic changes of post-Wall Europe, Awaking Europe in the Triple Global Crisis formulates an avant-gardist reconceptualization of the world system’s theory and outlines the blueprint for a European renewal. Attila Ágh delivers much more than a mere scholarly book, it is a manifesto for a re-united Europe. A must read that opens new insights and perspectives.’
– Christophe Solioz, MAP, Nomad think tank, Geneva, Switzerland
Contents
Contents: 1. Introduction to Awaking Europe in the Triple Global Crisis 2. Fragmented Europe turning to the Re-United Europ 3. The triple crisis as the opportunity for the European renewal 4. Europeanization and Democratization in the changing world systems 5. The global role of the EU and its partnership with Wider Europe 6. Conclusion: the long march to the Re-United Europe Bibliography Index
Add to Wish List
eBook for individuals
978 1 80088 780 0
From £25.00
Click here for options
eBook for library purchase
978 1 80088 780 0
View sample chapter and check access on: