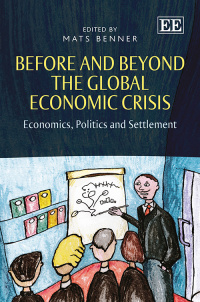 Before and Beyond the Global Economic Crisis

More Information
Critical Acclaim
Contributors
Contents
More Information
This timely and far-reaching book addresses the long-term impact of the recent global economic crisis. New light is shed on the crisis and its historical roots, and resolutions for a more robust, resilient future socio-economic model are prescribed.

Leading experts across a range of field including macroeconomics, politics, economic history, social policy, linguistics and global economic relations address key issues emerging from the crisis. They consider whether a new era in interactions between state, society and markets is actually dawning, and whether the finance-led economic growth model will be transformed into a new and more stable model. The role of the crisis in economy, polity and society, in shaking up existing institutional regimes and in paving the way for new ones is also discussed. Post-crisis combinations of state-society-economy relations are identified, and the question of whether the crisis has led to the reconsideration of economic relations and their institutional embeddedness is explored.

This challenging book will provide a thought provoking read for academics, students and researchers focusing on economics, political science and sociology. Policymakers in the fields of economic, industrial and social policy will also find this book to be an informative point of reference.
Critical Acclaim
‘This outstanding book examines whether and how the finance-led growth model can be transformed. The authors’ insightful analyses make significant contributions to our understanding of the global economic crisis since 2008 and the search for possible new paths beyond the crisis.’
– Stein Kuhnle, University of Bergen, Norway and Hertie School of Governance, Germany

‘This book sheds a powerful light on the current uncertainty of the world economy. Indispensable reading for understanding the roots of the crisis and the possible ways out.’
– Carlota Perez, Technological University of Tallinn, Estonia and London School of Economics, UK

Before and Beyond the Global Economic Crisis: An Introduction
Mats Benner

3. The Efficient-Markets Hypothesis After the Crisis: A Methodological Analysis of the Evidence
Fredrik Hansen

4. Macroeconomics After the Crisis: Bringing Finance Back In
Robert Boyer

6. Regulating the Family in Times of Economic Crisis: Sweden in the 1930s and the 1990s
Åsa Lundqvist

8. The ‘New New Deal’ as a Response to the Euro-Crisis
Bengt-Åke Lundvall

9. A Cultural Political Economy of Crisis Responses: The Turn to ‘BRIC’ and the Case of China
Ngai-Ling Sum

11. Macroprudential Supervision and Regulation – Lessons for the Next Crisis
Lars Jonung