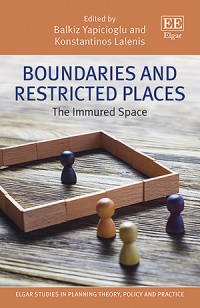 Drawing on examples from across the world, this book analyses not only what separates and divides space, but also the wide variety of impacts that the imposition of new barriers and boundaries or the opening of existing ones has on places, people and surrounding areas. Contributors integrate case studies with theoretical analysis to draw conclusions and advance an analytical framework of immured spaces. The chapters present a point of reference to highlight areas of significance and also to encourage further detailed work in this important area.

The book has a strong research dimension and will therefore be of interest to academic communities in planning, cultural heritage, psychology, architecture and urban studies. In addition, the use of case studies to develop a common framework will appeal to practitioners and policy makers.

Critical Acclaim
‘In Boundaries and Restricted Places, Balkiz Yapicioglu and Konstantinos Lalenis present a sometimes disquieting, sometimes inspiring collection of case studies on immured spaces. From the Old Jewish cemetery in Wrocław, gated communities in Brazil, or the forbidden part of Piraeus, the journey continues to borders in Ireland or Beirut, Nicosia or Indian slums. Scholars of border studies, geography, or spatial planning and architecture will cherish this rich contribution to a better understanding of enclosure and exclusion.’
– Ben Davy, Visiting Professor, University of Johannesburg, South Africa

‘Sometimes a testament to nationalism, racism, exclusivity, insecurity, or xenophobia, immured spaces and their material representations – walls, borders, gates, and boundaries – have always been an attribute of the urban. This collection of essays expands our notion of immured spaces and pushes us to rethink them through its rich account of material and immaterial, real and perceived spaces for the living and for the dead from different cities around the globe.’
– Anastasia Loukaitou-Sideris, University of California, Los Angeles, US

PART I DIVIDED SPACES
2 The immured against the divided: the case of the walled
city Nicosia 12
Balkiz Yapicioglu and Kenan Güven.
3 Navigating through invisible barriers: the evolution of
immured Beirut 23
Christine Mady
4 How a long-lasting political crisis and political ambitions
create damage to society – the case of the Vistula Spit area 37
Anna Brzezińska-Rawa
5 Borders in Ireland 2021: from immured places to
integration to divergence? 49
Brendan Williams
6 Divided architectures: hidden infrastructures of separation
and cohesion 64
David Coyles and Clare Mulholland

PART III PROTECTED SPACES
12 The gated communities and their socio-spatial
configurations in the metropolitan region of Curitiba, Brazil 154
Eliana do Pilar Rocha and Carlos Smaniotto Costa
13 The Leviathan of the South: awakening the public-use of
green areas in private condominiums? Emerging practices
in São Paulo, Brazil 168
Safira De La Sala and Everaldo Augusto Cambler
14 Immured spaces: narratives of policy instruments. Coastal
spaces along the southern part of the Caspian Sea in the
north of Iran 184
Maedeh Hedayatifard
15 Opening up of gated communities: a reality of a mirage? 198
Yung Yau

PART IV SPACES BEYOND
16 Boundaries in the city between the living and the dead 211
Yannis Polymenidis
17 Hidden space 224
Rena Karanouh
18 Spaces beyond borders: art on and within the walls of the
immured neighbourhood of Surlariçi in Nicosia 239
Alev Adil
19 Nobody’s or everybody’s place? The Old Jewish Cemetery
in Wroclaw – the story of destruction and protection 250
Magdalena Belof
20 Opening the barrier of military immured spaces in Italy: is
their regeneration going beyond the threshold of boundaries? 263
Federico Camerin