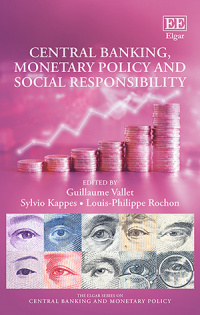 Scholars and students interested in central banking and monetary policy, the issue of social responsibility and the relationship between central banks and democracy will benefit from the ideas presented by the editors and authors of Central Banking, Monetary Policy and Social Responsibility.

Critical Acclaim
‘For the first time in decades, the very purpose of central banking is being debated again, and this time round not only by economists. Reflecting the debate’s breadth, this book will be useful for anyone who wants to form their own views before events drive the answers.’
– Paul Tucker, Harvard Kennedy School, US, author Unelected Power and former central banker

‘This book,  a new look at central banks, could not be more timely. The Great Financial Crisis of 2007-2009 and the global Covid pandemic have been among the greatest economic and social challenges to hit the world's economies since the Second World War. As if these were not enough, the global climate crisis (along with the threat of nuclear annihilation) is the worst existential threat society has faced, perhaps in millennia. Central Banks, as one of the most powerful macroeconomic institutions in most countries,  have been thrust into the position of needing to help ameliorate these unprecedented problems, and for most, these present dilemmas far beyond traditional trade-offs between inflation and unemployment. How are central banks dealing  with these new, highly consequential issues? How should they deal with them? In this book, a refreshing variety of authors – some seasoned, some relatively new, and as a group coming from a range of backgrounds and places – take a number of fresh, thoughtful and thought-provoking looks at contemporary central banks as they grapple with these problems. All students of central banking, and anyone concerned about these major problems, will find something important and valuable in these pages. They can bank on it.’
– Gerald Epstein, University of Massachusetts Amherst, US

‘Central banks are institutions that wield extraordinary power on the economy, whose independence from political pressures has been lauded by professional economists for decades. Yet, the forceful responses by central banks during the Covid-19 and the Global Financial Crisis, have also raised the discomfort with such unelected powerful economics institutions. Central Banking, Monetary Policy and Social Responsibility reveals how professional economists are revisiting their previously held belief, how central banks themselves are coping, and perhaps ought to be coping with this issue. In it, economists and former central bankers are forced to bare their soul and expose their true values. A must read.’
– Nadine Baudot-Trajtenberg, Former Deputy Governor of the Bank of Israel and Reichman University, Israel

Introduction to Central Banking, Monetary Policy and Social
Responsibility 1
Guillaume Vallet, Sylvio Kappes and Louis-Philippe Rochon
1 Will central bank independence withstand political pressure? 20
Charles Goodhart and Manoj Pradhan
2 Some of the effects of monetary structures, politics, and
memories on central banking 35
John H. Wood
3 The whys and how of central bank independence: from
legal principles to operational accountability 57
Maqsood Aslam, Etienne Farvaque and Piotr Stanek
4 Bankocracy, or a new age of the European Central Bank 74
Marie Cuillerai
5 Central banking and inequalities: old tropes and new practices 88
François Claveau, Clément Fontan, Peter Dietsch and
Jérémie Dion
6 Making environments safer: a safe asset for a green (and
financial) new deal and for more responsible central banks
– what could, and should, the ECB do? 112
Massimo Amato and Lucio Gobbi
7 Masters of the game: the power and social responsibility of
central banks and central bankers in a democracy 136
Louis-Philippe Rochon and Guillaume Vallet
8 The past is already gone, the future is not yet here: the case
of the Federal Reserve’s system of money management 159
Jong-Un Song
9 Precautionary monetary policy and democratic legitimacy:
tensions and openings 172
Rob Macquarie
10 The social sources of “unelected power”: how central
banks became entrapped by infrastructural power and what
this can tell us about how (not) to democratize them 195
Timo Walter