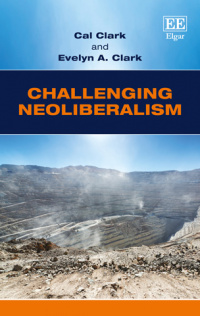 Globalization and the Economic Miracles in Chile and Taiwan

More Information
Critical Acclaim
Contents
More Information
Neoliberalism, which advocates free markets without government interference, has become increasingly utilized and controversial over the last three and a half decades. This book presents case studies of Chile and Taiwan, two countries that seemingly prospered from adopting neoliberal strategies, and finds that their developmental histories challenge neoliberalism in fundamental ways.

From one perspective, the political economies of Chile and Taiwan might appear to be poster children for neoliberalism. Both took aggressive policy actions (Taiwan in the 1960s and Chile in the 1970s) to create market-driven economies that were well integrated into the capitalist global economy. Subsequently, these two countries were cited as ‘economic miracles’ that opened their markets, resulting in rapid economic growth and development. A closer examination of the two nations, however, turns up very significant differences between them. In particular, Taiwan, with its much more statist approach to development, outperformed Chile by a considerable margin; and some of the experiences of Chile departed markedly from neoliberal predictions. The authors argue that Taiwan’s strategy was the more successful of the two, primarily because it discarded the ideology of neoliberalism and unfettered laissez-faire.

Scholars, educators, and students studying globalization, political economy, and/or economic development will find this book an irreplaceable addition to the discussion of neoliberalism.

Critical Acclaim
‘In examining countries that have experienced rapid economic growth and development, the proper role of the state vis-a-vis the market has been intensely scrutinized and debated. Engaging this literature through the lenses of neoliberalism and globalization, the authors provide a thorough and compelling study of the varying developmental experiences of Chile and Taiwan. This excellent book is a valuable reading for scholars and students of the politics and economics of development.’
– Alexander C. Tan, University of Canterbury, New Zealand

‘Challenging Neoliberalism provides an excellent analysis of the characteristics, contradictions and limits of neoliberalism and globalization. And it is a brilliant investigation of two exemplary cases of free-market based development: Chile and Taiwan. Employing institutionalist theory, Cal and Evelyn Clark provide a precise and penetrating study of the neoliberalization of these two countries and their divergent socio-economic growth policies that engendered equally important “economic miracles.” The authors’ ability to convincingly illustrate the ultimate incompatibility of neoliberalism and globalization makes Challenging Neoliberalism a novel and timely addition to the debate on neoliberal globalization.’
– Alessandro Bonanno, Sam Houston State University, US

‘Clark and Clark do an excellent job of pointing to the paradoxes inherent in neoliberal economic policies through a case study of Chile and Taiwan. It is unusual to see an analysis that involves two countries so different from one another. Clark and Clark argue that, despite their similar strategies of opening their markets to the global economy and pursuing export-led growth, there are tremendous differences in the outcomes in Chile and Taiwan. This book would be a great addition to courses on globalization and political economy. It renders complex concepts clear and presents substantial background information such that readers unfamiliar with Chile and/or Taiwan can make sense of their economic and social policies.’
– Tanya Maria Golash-Boza, University of California, Merced, US

‘Challenging Neoliberalism is both accessible and very well written. Students and educators alike will find this volume to be an excellent resource for learning about globalization and the economic miracles in different parts of the developing world. As such, I highly recommend this book to others; it is a meaningful contribution to the existing literature.’
– Dennis V. Hickey, Missouri State University, US

‘A highly sophisticated yet eminently readable account of how Chile and Taiwan's differing institutional structures shaped their neoliberal economic strategies in an age of rapid globalization. Essential reading for those interested in understanding the paradoxical roles that both states and markets play in long-term processes of economic development.’
– Stephen C. Ropp, University of Wyoming, US
Contents
Contents: 1. Neoliberalism and Globalization: The Puzzle of Chile and Taiwan 2. Neoliberalism and the Paradoxes in Economic Theory 3. The Stereotype of the Economic Miracles: Free Markets 4. An Overall Model of Development in Taiwan 5. An Overall Model of Development in Chile. 6. Neoliberalism and the Economic Miracles in Chile and Taiwan References Index