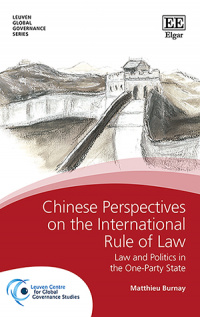 Chinese Perspectives on the International Rule of Law

Law and Politics in the One-Party State

9781788112383 Edward Elgar Publishing
Leuven Global Governance series
Matthieu Burnay, Lecturer in Global Law, School of Law, Queen Mary University of London (QMUL), UK, and Associate Fellow, Leuven Centre for Global Governance Studies, KU Leuven, Belgium
Publication Date: 2018 ISBN: 978 1 78811 238 3 Extent: 336 pp
This insightful book investigates the historical, political, and legal foundations of the Chinese perspectives on the rule of law and the international rule of law. Building upon an understanding of the rule of law as an 'essentially contested concept', this book analyses the interactions between the development of the rule of law within China and the Chinese contribution to the international rule of law, more particularly in the areas of global trade and security governance.

In particular, chapters focus on China’s impact on global trade and security governance. These case studies enable conclusions to be drawn regarding China’s more general perspectives on the international rule of law as a concept. Offering a thorough analysis of EU-China relationships, the book highlights the prospects and challenges for a meaningful dialogue on the rule of law and the international rule of law. In doing so, it illustrates the merits of the rule of law as a concept to engage in meaningful dialogues across a myriad of legal and political systems.

This book will hold particular appeal for students and scholars of Chinese law, International law, EU-China relations, and legal theory. Policy makers will also find this a stimulating read as the work aims to build both academic and policy bridges between the Western and Chinese conceptions on the rule of law at both national and international levels.

Critical Acclaim
‘Chinese Perspectives on the International Rule of Law is a timely contribution to an ongoing and important conversation on what China’s rise means for the future of liberalism and the global order. I trust it will stimulate further debate on these worthy topics.’
– Mark Jia, Asia Pacific Law Review

‘[This book] offers invaluable cautions for both critics and apologists writing on law in China today.’
– Pitman B Potter, The China Journal

‘Can rule of law adopt Chinese characteristics to bloom outside the triangle it is normally believed to form with democracy and human rights? This book represents a compendious attempt at deciphering this conundrum.’
– Santosh Pai, China Report

‘In this academically rich, thoughtful and nuanced analysis of rule of law-related discourses and practices in China, Burnay addresses the prospects for the emergence of a consensus on the rule of law and the international rule of law. An important contribution to the ongoing debate about law and politics in China and beyond.’
– Eva Pils, King's College London, UK