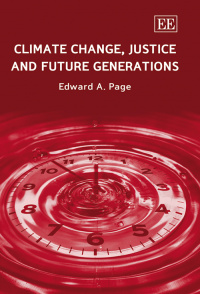 9781843761846 Edward Elgar Publishing
Edward A. Page, Associate Professor of Political Theory, Department of Politics and International Studies, Warwick University, UK
Publication Date: 2006 ISBN: 978 1 84376 184 6 Extent: 224 pp
Global climate change raises important questions of international and intergenerational justice. In this important new book the author places research on the origins and impacts of climate change within the broader context of distributive justice and sustainable development. He argues that a range of theories of distribution – notably those grounded in ideals of equality, priority and sufficiency – converge on the adoption of the ambitious global climate policy framework known as ‘Contraction and Convergence’.

More Information
Critical Acclaim
Contents
More Information
Global climate change raises important questions of international and intergenerational justice. In this important new book the author places research on the origins and impacts of climate change within the broader context of distributive justice and sustainable development. He argues that a range of theories of distribution – notably those grounded in ideals of equality, priority and sufficiency – converge on the adoption of the ambitious global climate policy framework known as ‘Contraction and Convergence’.

Climate Change, Justice and Future Generations will be of great interest to academics and students specialising in environmental ethics, politics and environmental sustainability. It will also be of general interest to those concerned with climate change and the environment.
Critical Acclaim
‘Climate Change, Justice and Future Generations is a valuable contribution to the debate on both theoretical and applied justice in climate change, and it fills a manifest gap in the current literature. . . Other strengths of the book are the depth and richness of the notes to each chapter, an inexhaustible mine of insights and suggestions for further readings, and the comprehensiveness of the index. These features enrich the authoritativeness of the book and greatly augment its usefulness for scholars and, more generally, for those concerned with the human dimension of climate change in the identification and grasp of its thorny and multifaceted ethical aspects.’
– Marco Grasso, International Environmental Agreements

‘Page effectively marries the issues raised by climate change science with analytical philosophy to provide a perspective on why or why not measures should be taken to reduce climate change and the risks/harm it poses for future generations. . . a valuable book for politicians and policy makers who seek to change the world and manage its climate.’
– Antoinette M. Mannion, Electronic Green Journal

‘We are badly in need of ways of understanding global problems that go beyond the current economic paradigms. Climate Change, Justice and Future Generations helps us with this task by effectively linking climate change with some important mainstream work on political justice. It should be a very useful book not just for the classroom and the academy, but also for the realm of policy.’
– Stephen Gardiner, University of Washington, US

‘The book begins with a detailed account of the science of climate change that is user friendly for non-scientists without sacrificing depth. . . Page’s analysis is impressive in both its scope and execution, and has a relevance and potential appeal in a number of fields.’
– Kerri Woods, Political Studies Review

‘Climate Change, Justice and Future Generations is an authoritative, analytical and extremely scholarly integration of scientific and technical information, empirical data and modelling concerning global climate change and high-level normative analysis. Page convincingly and patiently lays out the argument, including the ways in which climate change challenges settled modes of ethical thought, despite it being one of the most, if not the, important ethical issues of the age. As a book on both theoretical and applied ethics it makes an important contribution to the field.’
– John Barry, Queen’s University Belfast, UK

‘What the climate change policy called “Contraction and Convergence” has lacked until now is an authoritative theoretical grounding. Here Ed Page puts this right. In masterful fashion, he dissects the issues at stake in designing climate change policy, and leaves his readers in no doubt that there is a fair and effective alternative to rising tides. This is a book for students, researchers – and for anyone with the feeling that business as usual is no longer an option.’
– Andrew Dobson, University of Keele, UK
Contents
Contents: 1. Intergenerational Justice in a Warming World 2. Space, Time and the Science of Climate Change 3. Climate Change, Future Generations and the Currency of Justice 4. Climate Change, Future Generations and the Profile of Justice 5. The Non-Reciprocity Problem 6. The Non-Identity Problem 7. Concluding Chapter References Index
Add to Wish List
eBook for individuals
978 1 84542 471 8
From £25.60
Click here for options
eBook for library purchase
978 1 84542 471 8
View sample chapter and check access on: