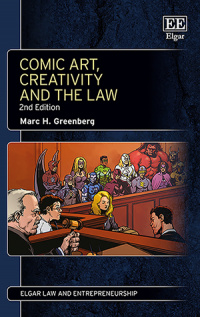 9781802202540 Edward Elgar Publishing
Elgar Law and Entrepreneurship series
Marc H. Greenberg, Professor of Law, Golden Gate University School of Law, US
Publication Date: 2022 ISBN: 978 1 80220 254 0 Extent: 224 pp
Graphic novels and comics have launched characters and stories that play a dominant role in contemporary popular culture throughout the world. The extensive revisions in this second edition of Comic Art, Creativity and the Law update the author’s analysis of important changes at the intersection of law and comics, featuring an examination of how recent cases will affect the creative process as applied to comic art.

More Information
Critical Acclaim
Contents
More Information
Graphic novels and comics have launched characters and stories that play a dominant role in contemporary popular culture throughout the world. The extensive revisions in this second edition of Comic Art, Creativity and the Law update the author’s analysis of important changes at the intersection of law and comics, featuring an examination of how recent cases will affect the creative process as applied to comic art.

Throughout, Marc H. Greenberg examines the impact of contract law, copyright law (including termination rights, parody and ownership of characters), tax law and obscenity law on the creative process. He considers how these laws enhance and constrain the process of creating comic art by examining the effect their often inconsistent and incoherent application has had on the lives of creators, retailers and readers of comic art. Thoroughly revised and updated, there are new chapters featuring a discussion of important new cases in copyright work-for-hire and fair use doctrines; the intersection of law and fan-based creations, such as fan fiction, fan art, fan film and cosplay; as well as a new chapter on licensing comics for motion pictures and television.

Designed for academics, practitioners, students of law and fans of comic art, the book offers proposals for changes in those laws that constrain the creative process, as well as a glimpse into the future of comic art and the law.
Critical Acclaim
Acclaim for the first edition:

‘Mark Greenberg's Comic Art, Creativity and the Law outlines the protective, and often restrictive, aspects of the relationship between the law and the comic book industry. Greenberg's text is a very accessible, even enjoyable read. While Comic Art, Creativity and the Law is fascinating, even compelling, its principle audience is entertainment comic book creators, attorneys, and fans.’
– Allen Berry, Technical Communication

‘Talk about an interesting project! This really quite riveting book from Edward Elgar’s Law and Entrepreneurship series explores a not very much explored area of the law; that is the effect, for better or worse, of the law on creativity and the creative process. . . While the book could be considered a guide to ‘the law of comics’, it is more than that. There is much analysis and commentary on the history, structure and modes of comic art, after which, the discussion turns to two legal doctrines: contract and copyright law. The impact of tax and obscenity laws is also discussed. . . With the ten pages ‘table of authorities’ and extensive footnoting, the book is a carefully researched academic study as well as a fascinating read. No doubt it will end up as an exceptionally well-thumbed volume in practitioners’ libraries on both sides of the Atlantic – and fans anywhere, of cartoons and comics will love it.’
– The Barrister Magazine

‘Marc Greenberg combines his professional expertise and deep knowledge of comics history to provide the first book-length treatment of the subject of law as it applies to comics. . . an invaluable resource for understanding the issues.’
– Rob Salkowitz, ICV2

‘Comic Art, Creativity and the Law is a highly welcome addition to the literature on the development of comic art. The book stands out in its knowledge of the comic industry and analysis of the legal challenges confronting creative artists. You will enjoy reading it whether you are an art law specialist or a Spiderman fan.’
– Peter K. Yu, Drake University Law School, US

‘In comics, justice always prevails, but the business of comics is a lot trickier. Marc Greenberg combines the expertise of a legal scholar with the passion and insight of a long-time comics fan, untangling the morass of legal issues facing comics – and all creative enterprises – in the past, present and future. Comic Art, Creativity and the Law is essential reading for anyone interested in understanding the multi-billion dollar global industry that comics has spawned.’
– Rob Salkowitz, author of Comic-Con and the Business of Pop Culture

‘Marc Greenberg’s Comic Art, Creativity and the Law gives a detailed, thoughtful “look under the hood” of one of the United States’ most vibrant and under appreciated creative industries. For anyone who cares about truly understanding the creative process and the lives of authors in our times, this should be part of your library.’
– Justin Hughes, Loyola Law School and chief US negotiator for the Beijing and Marrakesh copyright treaties

‘An intellectual tour de force and a compelling read . . . Far beyond a practical guide to the law of comics (though it is that too), Greenberg’s book touches on the nature of creativity, the basis for IP law and the history of this fascinating medium.’
– Mark A. Lemley, Stanford Law School, US

Contents
Contents: PART I INTRODUCTION TO THE SECOND EDITION PART II CREATIVITY AND THE LAW 1. The neuroscience of creativity 2. How the law views the creative process PART III COMIC ART – HISTORY, STRUCTURE AND MODE 3. A brief history of comic art 4. The structure and common modes for comic art PART IV THE IMPACT OF LAW ON THE CREATION AND STRUCTURE OF COMIC ART 5. Uneasy bedfellows: comic art creators and publishers – how comic art 6. Copyright law’s impact on the creative process in comic art 7. Fan-based creations – a look at Fan Fiction, Fan Art, Fan Films and Cosplay PART V CONSTRAINING CREATIVITY: THE EFFECT OF TAX LAW AND OBSCENITY LAW ON THE CREATIVE PROCESS 8. The power to tax and the First Amendment: Mavrides v. Board of Equalization 9. Censoring creativity, the Comics Code Authority and the birth of the Comic Book Legal Defense Fund 10. Obscenity law and the First Amendment: CBLDF to the defense 11. The bigger picture: obscenity, the First Amendment and the moral education of the young PART VI COMIC ART AND LAW IN THE INTERNATIONAL AND DIGITAL MARKETS 12. Comic art and the law in the international marketplace 13. Eight tips for licensing comics for film and television 14. Comic art, law and the digital revolution 15. Concluding remarks Index
Add to Wish List
eBook for individuals
978 1 80220 255 7
From £25.00
Click here for options
eBook for library purchase
978 1 80220 255 7
View sample chapter and check access on: