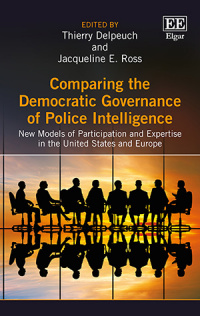 9781785361029 Edward Elgar Publishing
Edited by Thierry Delpeuch, Research Fellow, PACTE (Politiques publiques, Action politique, Territoires) at the Centre National de la Recherche Scientifique (CNRS), Sciences Politiques Grenoble and the Université de Grenoble Alpes in Grenoble, France and Jacqueline E. Ross, Professor of Law, University of Illinois, College of Law, US
Publication Date: 2016 ISBN: 978 1 78536 102 9 Extent: 416 pp
"Intelligence-led policing" is an emerging movement of efforts to develop a more democratic approach to the governance of intelligence by expanding the types of expertise and the range of participants who collaborate in the networked governance of intelligence. This book examines how the partnership paradigm has transformed the ways in which participants gather, analyze, and use intelligence about security problems ranging from petty nuisances and violent crime to urban riots, organized crime, and terrorism. It explores changes in the way police and other security professionals define and prioritize these concerns and how the expanding range of stakeholders and the growing repertoire of solutions has transformed both the expertise and the deliberative processes involved.

More Information
Contributors
Contents
More Information
Gathering and analyzing of information is a responsibility that police intelligence units are thought to do in relative isolation. Intelligence work in the United States and Europe, however, has been significantly transformed in recent years into a more collaborative process that combines the police with a mix of outsiders to make the practice of acquiring and assessing information more democratic. This volume examines how this partnership paradigm has transformed the ways in which participants gather, analyze and use intelligence for security problems ranging from petty nuisances and violent crimes to urban riots, organized crime and terrorism.

The book’s expert contributors provide a comparative look at police intelligence by exploring how emerging collaborative ventures have reshaped the way police define and prioritize public safety concerns. The book compares local security partnerships in both centralized and decentralized systems, presenting an unparalleled discussion of police intelligence not only in the English-speaking world but also in countries like Germany and France, whose adoption of this collaborative paradigm has seldom been studied. Ultimately, this book provides a timely debate about the effectiveness of intelligence gathering methods, the legitimacy of police tactics and related procedural justice concerns.

Because this book situates itself at the intersection of several disciplines, it will find an audience in multiple fields. Its diverse readership includes scholars and students of policing and security studies in law schools and criminal justice programs, as well as political science and sociology departments. Other significant audiences will include professionals and researchers in comparative law and comparative criminal procedure, in addition to the study of law and society.

PART II NETWORKS OPEN TO PARTICIPANTS OUTSIDE OF LAW ENFORCEMENT: THE INFLUENCE OF LOCAL SECURITY PARTNERSHIPS ON INTELLIGENCE ANALYSIS
2. Beat Meetings, Responsiveness to the Community, and Police Effectiveness in Chicago
Wesley G. Skogan

4. Information as a Form of Democratic Participation in Policing: Some Critical Reflections on the Role and Use of Online Crime Maps in the United Kingdom
Anna Barker

5. The English and Welsh Experiment in Democratic Governance of Policing through Police and Crime Commissioners: a Misconceived Venture or a Good Idea, Badly Implemented?
Adam Crawford

13. The Role of Trust in the Exchange of Police Information in the European Multilevel System
Hartmut Aden