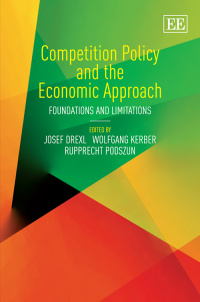 9780857937391 Edward Elgar Publishing
Edited by Josef Drexl, Director, Max Planck Institute for Innovation and Competition, Munich, Germany, Wolfgang Kerber, Professor of Economics, Philipps-Universität Marburg, Germany and Rupprecht Podszun, Chair for Civil Law, German and European Competition Law, Heinrich Heine University Düsseldorf, Germany
Publication Date: 2012 ISBN: 978 0 85793 739 1 Extent: 360 pp
This outstanding collection of original essays brings together some of the leading experts in competition economics, policy and law. They examine what lies at the core of the ‘economic approach to competition law’ and deal with its normative and institutional limitations. In recent years the ‘more economic approach’ has led to a modernisation of competition law throughout the world. This book comprehensively examines for the first time, the foundations and limitations of the approach and will be of great interest to scholars of competition policy no matter what discipline.

Competition Policy and the Economic Approach will appeal to academics in competition economics and law, policy-makers and practitioners in the field of antitrust/competition law as well as postgraduate students in competition law and economics. Those interested in the interplay of law and economics in the field of competition will also find this book invaluable.
Critical Acclaim
‘While the book will probably have its greatest appeal to scholars in the field, practitioners should not neglect it, as it offers a concise compilation of fundamental issues in competition law that frequently draws from concrete cases. It is true that the book delivers few definite answers but rather raises new questions, as acknowledged by the editors in their foreword. However, this will only add to the substance of the discussion and should not be regarded as a shortcoming. The book’s biggest strength may thus well be the fact that it constantly encourages the reader to challenge conventional thinking. Moreover, it rightly calls for a distinction between the use of economic insight to inform competition policy and improve the accuracy and effectiveness of its abstract rules on the one hand, and the use of in-depth quantitative economic analyses in individual cases on the other hand.’
– Hendrik Auf’mkolk, Competition and Regulation in Network Industries

10. The Impact of Innovation – Comments on Uwe Cantner and Wolfgang Kerber
Andreas Heinemann

17. On the (a)political Character of the Economic Approach to Competition Law
Josef Drexl