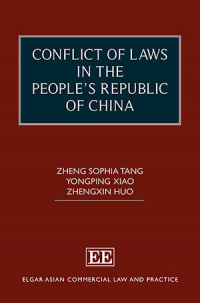 Conflict of Laws in the People’s Republic of China

9781849808583 Edward Elgar Publishing
Elgar Asian Commercial Law and Practice series
Zheng Sophia Tang, Professor, Newcastle University and Barrister (Middle Temple), UK, Yongping Xiao, Cheung Kong Scholars Distinguished Professor, Wuhan University and Zhengxin Huo, Professor, China University of Political Science and Law, China
Publication Date: 2016 ISBN: 978 1 84980 858 3 Extent: 512 pp
The area of conflict of laws in China has undergone fundamental development in the past three decades and the most recent changes in the 2010s, regarding both jurisdiction and choice of law rules, mark the establishment of modern Chinese conflicts system. Jointly written by three professors from both China and the UK, this book provides the most up-to-date and comprehensive analysis of Chinese conflict of laws in civil and commercial matters. It takes into account the latest developments in legislation and judicial interpretation, case law and judicial practice, and historical, political and economic background, especially recognizing the scholarly contribution made by Chinese scholars to this field.

More Information
Critical Acclaim
Contents
More Information
The area of conflict of laws in China has undergone fundamental development in the past three decades and the most recent changes in the 2010s, regarding both jurisdiction and choice of law rules, mark the establishment of a modern Chinese conflicts system. Jointly written by three professors from both China and the UK, this book provides the most up-to-date and comprehensive analysis of Chinese conflict of laws in civil and commercial matters, covering jurisdiction, choice of law, procedure, judgment and awards recognition and enforcement, and interregional conflicts in China.

Providing comprehensive and sophisticated analysis of current Chinese conflict of laws, the authors assess the actual judicial practice and case decisions. The book takes into account the historic, political and economic background of the subject matter, as well as relevant empirical evidence and data, especially recognizing the contribution of Chinese scholars in the field. It concludes that the Chinese conflicts system has entered into the stage of modernization and proposes policy to improve efficiency, prevent local protectionism, balance internationalization and nationalization, democratize legislative process and improve judicial training and judicial practice.

This timely book is an invaluable resource for academics and practitioners in private international law, conflict of laws, international law, international litigation, Chinese law and international civil and commercial matters involving China.
Critical Acclaim
‘This book provides not only a concise description of the various aspects of Chinese conflict of law in civil and commercial law, but also a pragmatic perspective on the law in practice in the Chinese courts. The authors take a critical approach in explaining the law in its social and economic context, and explore constructive approaches where there are gaps or problems in the law. . . . It is noteworthy that in discussing the problems associated with parties' choice of forum, the authors predicted that China would sign the Hague Convention on Choice of Court Agreements, an outcome that came to pass when China became the second Asian country to sign the Convention in September 2017. Much thought has also been put into the presentation of references to materials published in the Chinese language. . .

It is fair to say that as the first book to be published under the banner of the Elgar Asian Commercial Law and Practice Series, Conflict of Laws in the People's Republic of China has given the series a running start. This book is a valuable resource for English-speaking academics and practitioners who are interested in the theory and practice of private international law in China. It has the potential to grow, with subsequent editions, into a leading treatise in the English language on Chinese private international law.’
– T.M. Yeo, Singapore Management University, (2018) Cambridge Law Journal 212


‘. . . Conflict of Laws in the People’s Republic of China is still the best book on the market. It provides an up-to-date analysis of the rules and practice of PIL in China, including a critical evaluation of PIL’s current status and future development. It is a must have for academics conducting comparative PIL research and also for professionals practicing in this area of law.’
– Zhu Lei, Asia Pacific Law Review

‘The combination of both common law and civil law backgrounds of the authors makes this book a stimulating comparative work. The writing style of the book is more like an English law hornbook. Compared with other scholarship, Conflict of Laws in the People’s Republic of China is especially easy to comprehend for readers from a common law background. It is also very valuable for civil law scholars who are interested in learning Chinese conflict of laws from a comparative-law aspect.. . . Conflict of Laws in the People’s Republic of China is comprehsensive and thorough because of its up-dated scope, in-depth analysis, balance of praise for and criticism of the law, and stimulating comparative law study.’
– Jie (Jeanne) Huang, The partially modernized Chinese conflicts system: achievements and challenges, (2018) 13 J Priv IL 633

‘This is an excellent and up-to-date book that enables the English-speaking world to get an accurate and comprehensive understanding of private international law in mainland China. The Chinese system can be said to be a mixed system, in that it is only partially governed by statute and much of the law still emerges from case law and interpretations of the law given by the Supreme People’s Court. The authors point out that only in very few cases do the Chinese courts actually apply foreign law. This tendency of the judges to avoid the application of foreign law is one of several features of the Chinese system of private international law that shows the importance of judicial decisions to understanding how the system actually works. The writers rightly point out areas where Chinese private international law could be improved, with recommendations that China should liberalise its approach to recognition and enforcement of foreign judgments by adopting a de jure approach to reciprocity and by entering into multilateral treaties like the Hague Choice of Court Agreements Convention 2005.’
– Paul Beaumont, University of Aberdeen, UK

‘With its massive bibliography of almost 40 pages, its detailed table of contents and index, this book is a valuable find for general readers and researchers who will also appreciate the extensive tables of cases and of legislation.’
– The Barrister