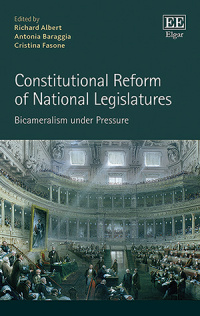 9781788978637 Edward Elgar Publishing
Edited by Richard Albert, William Stamps Farish Professor in Law, University of Texas at Austin, US, Antonia Baraggia, Assistant Professor of Comparative Public Law, Department of Italian and Supranational Public Law, University of Milan and Cristina Fasone, Assistant Professor of Comparative Public Law, Department of Political Science, LUISS Guido Carli, Italy
Publication Date: 2019 ISBN: 978 1 78897 863 7 Extent: 320 pp
Despite the importance of second chambers to the success of constitutional democracies around the world, today many fundamental questions about bicameralism remain understudied and undertheorized. What makes bicameral reform so difficult? Why choose bicameralism over unicameralism? What are the constitutional values of bicameralism? This innovative book addresses these questions and many more from comparative, doctrinal, empirical, historical and theoretical perspectives.

More Information
Critical Acclaim
Contributors
Contents
More Information
Despite the importance of second chambers to the success of constitutional democracies around the world, today many fundamental questions about bicameralism remain understudied and undertheorized. What makes bicameral reform so difficult? Why choose bicameralism over unicameralism? What are the constitutional values of bicameralism? This innovative book addresses these questions and many more from comparative, doctrinal, empirical, historical and theoretical perspectives.

Featuring contributions from leading and emerging scholars in the field, this book provides a timely account of the tensions between bicameralism and its reform, demonstrating for the first time how this relates to the protection of liberal democracy and the rule of law. Contributors analyse the pressures that contemporary constitutional politics exert on bicameralism in an array of countries and legal systems, including the complex relationships between the EU and national second chambers.

Scholars and students of comparative and constitutional law, legislative studies and political science will find this book an invaluable resource. Policymakers at national and EU levels, parliamentarians and others working closely with parliamentary institutions will also find it insightful.
Critical Acclaim
‘Despite its distinguished constitutional history and rationales, bicameralism has often been a contested choice. This excellent edited collection explores the pros and cons of bicameral legislative structures and especially their ability to reform themselves. Covering a rich variety of jurisdictions, the book is bound to be of great interest to comparative constitutionalist and political scientists alike.’
– Robert Schütze, Durham Law School, UK

‘This volume brings a fresh approach to and analysis of bicameralism as a constitutional law concept. The vast contribution of case studies, together with concluding chapters of each section of the book, provides depth and reflection to the overall analysis. As pointed out in the book’s Foreword and Conclusion, the topic is especially relevant in times of populism and challenges to liberal democracy and constitutionalism. Anyone with an interest in comparative constitutional law in general and constitutional design and its impact on the resilience of liberal democracies in particular, will benefit from the contributions to this book.’
– Anna Jonsson Cornell, Uppsala University, Sweden

‘Parliaments’ second chambers are often challenged to prove they have a purpose. Still bicameralism has been surprisingly resilient, against all rational approach to political institutions’ engineering. Edited by three scholars from both sides of the Atlantic, this valuable collection sheds new light on why bicameralism keeps being put under pressure but is so hard to change, and is particularly relevant in light of the ongoing populist wave. A must for those who look for an answer about what to do with bicameralism today.’
– Carlo Fusaro, University of Florence, Italy
Contributors
Contributors: R. Albert, A. Baraggia, C. Cigala, P. Faraguna, C. Fasone, K. Granat, B. Guastaferro, D. Kenny, N. Kulenović, P. Leyland, P.J. Monge, G. Piccirilli, P. Popelier, M. Romaniello, M. Russell, D. Serra, D. Štrus, P. Vakleva, M. Vatsov, W. Wolfs

Foreword
Meg Russell, Bicameralism in an Age of Populism

4. How Does the European Union Challenge Bicameralism? Lessons from the Italian Case
Pietro Faraguna

5. The Scrutiny of EU Documents in Bicameral System. Opportunity or Weakness?
Wouter Wolfs and Caterina Cigala

6. The House of Lords faces up to Brexit
Peter Leyland

10. The Failed Referendum to Abolish the Ireland’s Senate: Rejecting Unicameralism in a Small and Relatively Homogenous Country
David Kenny

13. The Future of Poland’s Second Chamber: Is the Senate Still Needed?
Katarzyna Granat

14. Reshaping the National Council of the Republic of Slovenia
Dušan Štrus

15. Bicameralism(s) in the Age of Ethnicity: Prospects for Reform of Legislatures in Bosnia and Herzegovina
Nedim Kulenović

16. Bicameralism As a Normative Choice In the Tension Between Its Reform and Its Passing
Giovanni Piccirilli

Conclusion
What Are We To Make of Bicameralism in the Twentieth-First Century? The Reform Trap
Cristina Fasone