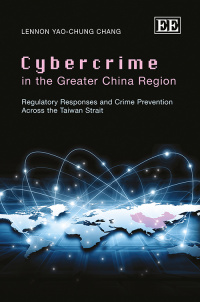 Cybercrime in the Greater China Region

Regulatory Responses and Crime Prevention Across the Taiwan Strait

9780857936677 Edward Elgar Publishing
Lennon Yao-chung Chang, Monash University, Australia
Publication Date: 2012 ISBN: 978 0 85793 667 7 Extent: 272 pp
Cybercrime is a worldwide problem of rapidly increasing magnitude and, of the countries in the Asia Pacific region, Taiwan and China are suffering most. This timely book discusses the extent and nature of cybercrime in and between Taiwan and China, focussing especially on the prevalence of botnets (collections of computers that have been compromised and used for malicious purposes).

More Information
Critical Acclaim
Contents
More Information
Cybercrime is a worldwide problem of rapidly increasing magnitude and, of the countries in the Asia Pacific region, Taiwan and China are suffering most. This timely book discusses the extent and nature of cybercrime in and between Taiwan and China, focussing especially on the prevalence of botnets (collections of computers that have been compromised and used for malicious purposes).

The book uses routine activity theory to analyse Chinese and Taiwanese legal responses to cybercrime, and reviews mutual assistance between the two countries as well as discussing third party cooperation. To prevent the spread of cybercrime, the book argues the case for a ‘wiki’ approach to cybercrime and a feasible pre-warning system. Learning from lessons in infectious disease prevention and from aviation safety reporting, Cybercrime in the Greater China Region proposes a feasible information security incident reporting and response system.

Academics, government agency workers, policymakers and those in the information security or legal compliance divisions in public and private sectors will find much to interest them in this timely study.
Critical Acclaim
‘In this well-researched study. . . Dr Lennon Chang tackles the topic head-on with in-depth technical and legal analyses backed up by a wide range of interviews with internet professionals in both the private and public sectors and law enforcement. It is an accessible paper that is simple enough to understand for IT and legal novices, and detailed enough to be useful for experts.’
– Howard Shih, Law Society Journal

‘This really quite exciting book from Edward Elgar plies it way through vast areas of uncharted waters in the international fight against cybercrime. It’s a work of original research which will go some way to establishing a common understanding internationally, of how to combat what has become a global problem calling for a global solution and thus requiring a greater degree of cross-border cooperation between nation states. . . Anyone interested in, or involved with cybercrime related issues, from lawyers to sociologists, criminologists and of course IT professionals will be fascinated by this book. . . As a research tool alone, this book has certainly earned its place in every professional and academic library.’
– Phillip Taylor MBE and Elizabeth Taylor, The Barrister Magazine

‘Professor Chang’s very thoughtful and impressively researched study of cybercrime in the greater China region is an invaluable contribution to the information and analyses available in this area. It not only provides important, and heretofore unavailable data, about the incidence and nature of cybercrime in this region, it also offers insightful suggestions into how this problem can most effectively be controlled. It belongs in the library of anyone interested in this area.’
– Susan Brenner, University of Dayton, US

‘East Asia is a heartland of the variegated scams of the cybercrime problem. Yao Chung Chang’s book is an innovative application of routine activity theory and regulatory theory to cybercrime prevention across the cybergulf between China and Taiwan. The long march through the scams and across the Taiwan Strait is fascinating. Chang leads us to ponder a wiki cybercrime prevention strategy that might work in such treacherous waters.’
– John Braithwaite, Australian National University

‘Cybercriminals exploit weaknesses in cross-border crime cooperation and this is aptly illustrated in the context of relations between Taiwan and the People’s Republic of China. Chang’s book shows that even in the climate of mistrust that prevails basic forms of cross-border police cooperation can be achieved. Pragmatism and professional interest in what helps to track elusive computer hackers who have driven a massive surge in the application of malware as “crimeware” make good grounds for common cause. This book provides a valuable example of what can be achieved even in the most unpromising of mutual legal assistance situations and opens up for readers the problems and issues confronted by Chinese cyber-police.’
– Roderic Broadhurst, Australian National University

‘Very rarely do you read books that impress these days, but for me Cybercrime in the Greater China Region was one of them. Dr Chang is one of a number of young and exciting international academics who are exploring previously unchartered territory in their quest for new understandings about cybercrime. In his book, Dr Chang manages to locate a global policing problem within the sometimes tense political and cultural constraints of regional policing. For me, Professor Grabosky neatly sums up the strengths of the book in his foreword, I can only endorse them.’
– David S. Wall, University College, Durham University, UK

‘Lennon’s research is an important contribution to the current limited understanding of the cybercrimes and related laws/regulations and incident reporting issues across the straits between the two major economies in the Asia region. A well researched book, and highly informative with practical suggestions for enhancing visibility and cooperation to improve the overall state of cybersecurity in the region, especially between the two economies.’
– Meng-Chow Kang, Cisco Systems, China