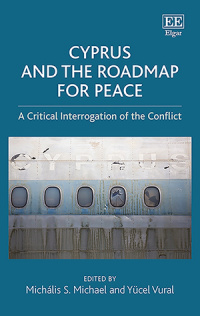 Cyprus and the Roadmap for Peace

A Critical Interrogation of the Conflict

9781786430489 Edward Elgar Publishing
Edited by Michális S. Michael, Director, Centre for Dialogue-Global Reconciliation, Australia and Yücel Vural, Co-President, Cyprus Academic Dialogue
Publication Date: 2018 ISBN: 978 1 78643 048 9 Extent: 296 pp
While 2017 offered much ground for optimism in resolving the longstanding ‘Cyprus problem’, a closer inspection of the differences experienced reveals the complex difficulties that surround the conflict. The impasse introduced a short-lived confidence that concealed the contradictory combustion of a ‘frozen’/dormant conflict. Despite intense high-level negotiations, a way forward has proved elusive, while local constituency expectations are challenging their leaders for control over both process and outcome. This dilemma lies at the heart of this edited volume.

More Information
Critical Acclaim
Contributors
Contents
More Information
The UN-led Cyprus peace process is in desperate need of radical transformation. This book makes a notable contribution towards changing the current discourse by empowering the main parties to better value their relationship. By altering goals and perceptions, the authors explore alternative visions for the future of Cyprus, suggesting both realistically feasible and politically challenging ideas.

Using an exciting, innovative and multifocal approach, the authors discuss the practical application of specific solutions and explore the radical disagreements of the conflict at both social and political levels. Reflecting on the idea of a ‘post-settlement’ state of affairs and the prospect of such a reality, chapters illustrate the problems, challenges and political dynamics of Cyprus. The book explores the conceptual approaches to dialogue; reviews Greek, Turkish and Cypriot policies; probes the challenging roles of the UN and EU; canvasses Greek Cypriot and Turkish Cypriot perspectives on the conflict; and, finally, offers dialogical reflections and debates on past and future problems.

Allowing open and expressive dialogue, this book will interest those in academic and practitioner roles focused on international politics, conflict resolution and peace studies. It allows for further understanding of the complex perspectives presented in Cyprus that have great relevance in other international settings.
Critical Acclaim
‘The editors of the book are very careful about approaching the issues of the ongoing conflict in an objective manner. Every part of the book is organized to include the views of every relevant party to the conflict. Moreover, irrespective of its historical, theoretical, or normative character, almost every chapter concludes with a policy recommendation about the future prospects of the conflict. For this reason, the book is not only an excellent and thorough description of the conflict, but a significant contribution to the conflict resolution literature.’
– Emre Feyzi Çolakoğlu, Insight Turkey

‘Rare are the books in conflict resolution that truly engage theory to improve practice and learn from practice to improve theory. This book is a very welcome exception. This book is organized around a sense of possibility, commitment to the indefatigable work of peace, and a careful analysis of progress and set-backs over the decades. It provides all of these and from a wide range of perspectives and backgrounds. I predict it will become a handbook for the next, and hopefully this time successful, push for peace.’
– Jay Rothman, The ARIA Group, Jerusalem, Israel and Yellow Springs, Ohio US

PART I CONCEPTUAL APPROACHES TO DIALOGUE
1. A new approach to an old conflict – identifying the problem and imagining a solution
Michális S. Michael and Yücel Vural

PART II REVIEW OF GREEK, TURKISH AND CYPRIOT POLICIES AND POLITICS
3. What does Turkey want from Cyprus?
Altuğ Günal

10. The limits of the EU in the Cyprus conflict: the Greek Cypriot perspective
George Christou

11. The EU’s role in the Cyprus conflict: a Turkish perspective
Erhan İçener

16. Between the ‘feasible’ and the ‘desirable’
Dimitris Christofias

Realizing the Abidjan Principles on the Right to Education

A Research Agenda for Regional and Local Government