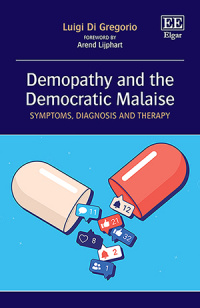 More Information
Critical Acclaim
Contents
More Information
This unique book presents original concepts to characterize the current crisis of democracy. Offering a comparative study of original electoral data and analysis of contemporary trends, models and theoretical frameworks, Luigi Di Gregorio argues that democracy is affected by ‘demopathy’; it is sick and is in need of therapy.

Luigi Di Gregorio explores how democratic malaise derives from the transition to postmodernity and the rise of individualization: the loss of social meaning, the end of meta-narratives, the crisis of knowledge and cognitive authorities, narcissism and new perceptions of time and space. The author argues that mass media and technological innovations are the main drivers of this change and have heightened the logic of the consumer society. The resulting psychological democracy is that of a permanent ‘pollcracy’, whose leaders are simply pursuers of public opinion. The book concludes that democracy must be defended by building a positive narrative to counterbalance the effects of these trends.

Taking a multidisciplinary approach, this book will be critical reading for scholars and students of political science, political sociology, political theory and political communication and marketing. Its broad perspective paints a big picture that will also be beneficial for political consultants and policy analysts.

Critical Acclaim
‘This work offers a convincing analysis that stresses the mutual causation between political leadership, citizens, and the media. I am confident that promising (and achievable) cures follow logically from this analysis. Demopathy and the Democratic Malaise is an outstanding book that democrats anywhere should pay close attention to.’
– From the Foreword by Arend Lijphart, University of California, San Diego, US

Especially when confronting the pandemic's extraordinary, dramatic event, the debate about contemporary democratic malaise becomes even more relevant. Di Gregorio originally analyzes the explanations of that malaise through the vicious circle involving leaders, media, and citizens. Thus, the only appropriate therapy is to increase public awareness and to face democratic problems with feasible provisions. By looking at symptoms, diagnosis and therapy, this book deserves the greatest attention for all democrats who would like to heal our self-inflicted illnesses.’
– Leonardo Morlino, LUISS Guido Carli, Italy

‘In his ground-breaking book, Professor Luigi Di Gregorio presents a multi-disciplinary, thought-provoking analysis of the role of all forms of political mass media communication in Western democracies in an era of “perpetual crisis management” politics. He argues that governments are relying too heavily on public opinion research to make decisions, turning leaders into followers, and in the process, destroying the very fabric of democracy as we know it today. He offers an innovative solution to respond to this crisis, as he argues that attempts to deal with it thus far have been unsuccessful. This book is a must read for students, scholars, political strategists and the general public who seek to better understand the rapidly changing dynamics in democracies around the globe.’
– Bruce I. Newman, DePaul University, US

‘This book maps out a clinical picture of the current democratic crisis and offers a convincing diagnosis. Its symptoms are individualism, narcissism, new relations with time and space, the end of meta-narratives, the credibility crisis of political institutions and public discourses. These are the main signs of a deconstruction of post-democratic demos. Democracies are affected by a sort of autoimmune and degenerative pathology that affects all dimensions of life in society and ultimately destroys the demos itself.’
– Christian Salmon, CNRS, France

Contents
Contents: Foreword 1. Introduction to demopathy and the democratic malaise PART I SYMPTOMS 2. The contemporary crisis of democracy. Symptoms of the democratic malaise PART II DIAGNOSIS 3. The origin of the crisis. Individualized modernity and the narcissist syndrome 4. The communication and image society. The driver of the narcissist syndrome 5. Demopathy. Public emotion, pollcracy, followship PART III THERAPY 6. Towards a democracy of the imaginary. An evolutionary perspective 7. (Covid) Afterword Index
Add to Wish List
eBook for individuals
978 1 80088 151 8
From £25.00
Click here for options
eBook for library purchase
978 1 80088 151 8
View sample chapter and check access on: