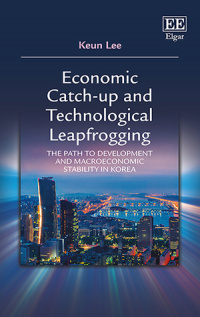 The Path to Development and Macroeconomic Stability in Korea

9781785367922 Edward Elgar Publishing
Keun Lee, winner of the 2014 Schumpeter Prize, and Professor, Seoul National University, Korea
Publication Date: 2016 ISBN: 978 1 78536 792 2 Extent: 392 pp
This book elaborates upon the dynamic changes to Korean firms and the economy from the perspective of catch-up theory. The central premise of the book is that a latecomer’s sustained catch-up is not possible by simply following the path of the forerunners but by creating a new path or ‘leapfrogging’. In this sense, the idea of catch-up distinguishes itself from traditional views that focus on the role of the market or the state in development.

More Information
Critical Acclaim
Contents
More Information
This book elaborates upon the dynamic changes to Korean firms and the economy from the perspective of catch-up theory. The central premise of the book is that a latecomer’s sustained catch-up is not possible by simply following the path of the forerunners but by creating a new path or ‘leapfrogging’. In this sense, the idea of catch-up distinguishes itself from traditional views that focus on the role of the market or the state in development.

The author provides a comprehensive account of the micro and macro level changes, deals with both firm- and country-level capabilities, and explores the issue of macroeconomic stability to overcome financial crisis. The book demonstrates that at the firm level the focus is on innovation capabilities, diversification, internationalization and job creation. It goes on to examine the rise and upgrading of big businesses, such as Samsung, as well as the global success of SMEs.

Comprehensive and illuminating, this is an ideal book for students, academics and researchers interested in the economics of development and technological innovation. It will also be a valuable source book for policy makers in international development agencies, governments and the public sector.
Critical Acclaim
‘This book facilitates a comprehensive understanding of economic catch-up, technological leapfrogging, and the neo-Schumpeterian perspective of economic growth.’
– Jungho Kim, Asian Pacific Economic Literature

‘The Korean experience has fascinated scholars around the world as one of the most remarkable stories of “catch-up” from very low to high levels of development. This book, by one of the leading Korean experts on industrial policy, argues that catch-up is not about following the paths of frontrunners but rather about finding new paths to technologically “leapfrog”. The application of this fundamental insight into the Korean story will be recognized as a landmark in this debate.’
– José Antonio Ocampo, Columbia University, US

‘This book gives a full picture of the factors that made it possible for South Korea to move from being a poor economy to becoming close to Japan in terms of income per capita. It shows that earlier debates on the respective role of markets and state are misleading, and that the key to understanding economic catch-up lies in specific technological strategies that were outcomes of an interplay between state policies and firm strategies. It is demonstrated that the key to understanding catch-up in South Korea is “technological leapfrogging” where dominant firms enter into technologies that are both new and in the process of rapid change. The combination of macro-economic analysis with sectoral and enterprise perspectives gives a more adequate understanding of economic dynamics than traditional textbooks can offer.’
– Bengt-Åke Lundvall, Aalborg University, Denmark

‘The triumphant rise of South Korea has been a subject of inconclusive research over the last three decades. In this original book Professor Keun Lee provides the most persuasive account to date by stressing the importance of leapfrogging and catch-up in rapid economic growth. This path-breaking book is a rich source of lessons for emerging and recovering economies.’
– Calestous Juma , Harvard Kennedy School, US and Author of Innovation and Its Enemies: Why People Resist New Technologies

‘This book provides new perspectives on how Korea managed to close the gap with the industrialised countries. The so-called catch-up process is explored at every level – the economy, the sector and sub-sector and the individual firm (both large and small). Drawing from the lessons of Korea, and utilising extensive empirical research, Keun Lee provides insights as to how other developing countries might close the gap. This book will appeal to all those who seek to understand the development of Korea and the implications of the Korean experience for our understanding of the processes of development and associated technological advance.’
– David Kaplan, University of Cape Town, South Africa

‘This book by Professor Keun Lee examines how South Korea has made two successful transitions that have helped transform a poor, war-torn economy into one that produces and exports high-tech manufacturing goods. The first took place in the middle of the 1980s and led to the transformation of the economy from one specializing in the production of low-skilled labor-intensive products into one that produces and exports higher-end manufacturing goods. The second turning point, which took place during the 1997–98 financial crisis, led to a radical opening up of the economy and various structural reforms. He argues that the experiences of Korea shed light on two critical, longer-term issues that confront many of the catch-up economies – that of building up technical capabilities and maintaining macro-financial stability.’
– Chung Lee, University of Hawaii at Manoa, US
Contents
Contents: 1. Introduction PART I CATCH-UP AND LEAPFROGGING AT THE ECONOMY LEVEL 2. Historical Origins and Initial Conditions for Economic Catch-up 3. Korean Model of Catch-up Development: A ‘Capability-based View’ 4. Intellectual Property Rights and Technological Catch-up in Korea 5. From Miracle to Crisis and the Mirage of the Post-Crisis Reform 6. Maintaining Macro Stability for a Crisis-resilient Growth in Korea 7. Is Leapfrogging-Style Reform Possible in North Korea PART II CATCH-UP AND LEAPFROGGING AT THE SECTOR LEVEL 8. Catch-up and Leapfrogging in the 6 Sectors in the 1980s and 1990s 9. Digital Technology as a Window of Opportunity for Leapfrogging: The Display Industry 10. Technological Catch-up in Capital Goods Sector PART III CATCH-UP AND INTERNATIONALIZATION BY BIG BUSINESSES AND THE SMES 11. Samsung, Created in Korea and Replicated Overseas 12. Moving Factories Overseas and Impacts on Domestic jobs: Case of Samsung 13. Catch-up and Path-creating by SMEs: From OEM to OBM 14. Sequential Internationalization of the Korean SMEs in China Index