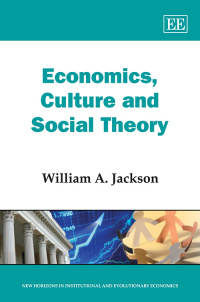 More Information
Critical Acclaim
Contents
More Information
Economics, Culture and Social Theory examines how culture has been neglected in economic theorising and considers how economics could benefit by incorporating ideas from social and cultural theory.

Orthodox economics has prompted a long line of cultural criticism that goes back to the origins of economic theory and extends to recent debates surrounding postmodernism. William A. Jackson discusses the cultural critique of economics, identifies the main arguments, and assesses their implications. Among the topics covered are relativism and realism, idealism and materialism, agency and structure, hermeneutics, semiotics, and cultural evolution. Drawing from varied literatures, notably social and cultural theory, the book stresses the importance of culture for economic behaviour and looks at the prospects for a renewed and culturally informed economics.

The book will be invaluable to heterodox economists and to anyone interested in the links between culture and the economy. It takes an interdisciplinary approach, arguing against the isolation of economics, and will therefore hold wide appeal for social scientists working in related fields, as well as for economists specialising in cultural economics and economic methodology.
Critical Acclaim
‘. . . the book is excellent in setting out and explaining a fundamental critique of economics – one moreover that has been missed by most other current critics of the field. Making this case is an achievement. Hopefully, it will have a greater impact than its author probably expects.’
– Journal of Cultural Economics

‘Economics evolved by perfecting the taking of “culture” out of its reductionist and virtual world. But culture has recently been reintroduced, both as a sphere of application for an otherwise unchanging methodology and as a weak form of acknowledging that the “economic” alone is inadequate as the basis even for explaining the economy. This volume is an essential critical starting point for understanding the changing relationship between economics and culture and in offering a more satisfactory and stable union between the two.’
– Ben Fine, University of London, UK
Contents
Contents: Preface Part I: Introduction 1. Cultural Thought and its Origins 2. The Meaning of Culture Part II: The Cultural Critique of Economics 3. Early Critical Arguments (1800–1870) 4. Culture and the Social Sciences (1870–1950) 5. Theory Divided: Economic, Social and Cultural (1950–Present) 6. Common Themes Part III: Implications of the Cultural Critique 7. Relativism and Realism 8. Idealism and Materialism 9. Agency and Structure 10. Interpretative Methods 11. Social and Economic Evolution Part IV: Conclusion 12. Towards a Culturally Informed Economics? Bibliography Index
Add to Wish List
eBook for individuals
978 1 84980 211 6
From £25.00
Click here for options
eBook for library purchase
978 1 84980 211 6
View sample chapter and check access on: