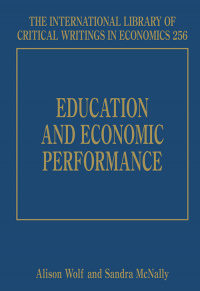 More Information
Critical Acclaim
Contributors
Contents
More Information
Throughout the developed and developing worlds, education spending is seen as a key tool for government policy makers in the quest for economic growth. Promoting ‘human capital’ development is a prime objective for economic and education ministries. The seminal articles in this essential volume include early classics which explain why education became central to productivity debates and more recent papers which elucidate the enormous controversies in this important field.

This collection, with an original introduction by the editors, will be of great interest to academics and students interested in growth, productivity, innovation and economic performance.
Critical Acclaim
‘The book under review is a rich selection with overviews, macro level and cross country investigations and micro level case studies, with in-depth, scholarly theoretical and analytical contributions to various economic aspects of education – how education influences the performance of the individuals in the labour market. The theoretical, methodological and empirical insights the various contributors provide are valuable and researchers would find the book immensely useful.’
– Jandhyala B.G. Tilak, Journal of Educational Planning and Administration

‘Issues concerning education and economic performance are at the heart of debates about education in contemporary society. The articles in this collection will be an essential resource for academics, policy makers and practitioners with an interest in this area’.
– Professor Sir Robert Burgess, University of Leicester, UK

‘The relationship between education and national economic competitiveness seems so taken-for-granted these days that it is rarely examined systematically. Nor is the claim subjected to historical analysis in ways that help us to understand the grip that the model has on policymakers globally. This excellent and masterly-edited collection by Alison Wolf and Sandra McNally remedies these omissions in comprehensive form. As such, it throws invaluable academic light on global model diffusion in the contemporary world. But it also acts as an important corrective to the often unthinking economism that appears to grip higher education policymakers when considering reform to their national systems and thus potentially acts as an important guide to those decision makers wise enough to read this impressive book.’
– Roger King, Open University, UK
Contributors
22 articles, dating from 1964 to 2011
Contributors include: D. Acemoglu, M. Blaug, L. Dearden, E.F. Denison, C. Goldin, L.F. Katz, A.B. Krueger, S. Machin, L. Pritchett, J. Van Reenen
Contents
Contents:

PART I EDUCATION AND GROWTH
A. Early Classics
1. Edward F. Denison (1964), ‘Measuring the Contribution of Education (and the Residual) to Economic Growth’
2. Mark Blaug (1972), ‘Educated Unemployment in Asia: A Contrast Between India and the Philippines’
3. Barry Chiswick (2003), ‘Jacob Mincer, Experience and the Distribution of Earnings’
4. Robert J. Barro and Jong-Wha Lee (1993), ‘International Comparisons of Educational Attainment’
5. Robert J. Barro and Jong-Wha Lee (1994), ‘Sources of Economic Growth’

B. Overviews
6. Jacob Mincer (1984), ‘Human Capital and Economic Growth’
7. Alan B. Krueger and Mikael Lindahl (2001), ‘Education for Growth: Why and for Whom?’
8. Alison Wolf (2004), ‘Education and Economic Performance: Simplistic Theories and their Policy Consequences’
9. Lant Pritchett (2001), ‘Where Has All The Education Gone?’

PART II TYPE OF EDUCATION
A. Years Versus Qualifications
10. Anna Vignoles, Augustin De Coulon and Oscar Marcenaro-Gutierrez (2011), ‘The Value of Basic Skills in the British Labour Market’
11. Colm Harmon and Ian Walker (1995), ‘Estimates of the Economic Return to Schooling for the United Kingdom’
12. Richard Blundell, Lorraine Dearden and Barbara Sianesi (2005), ‘Measuring the Returns to Education’

B. Elite Versus Non-elite Institutions
13. Dan A. Black and Jeffrey A. Smith (2006), ‘Estimating the Returns to College Quality with Multiple Proxies for Quality’
14. Stacy Berg Dale and Alan B. Krueger (2002), ‘Estimating the Pay-off to Attending a More Selective College: An Application of Selection on Observables and Unobservables’

C. General Versus Vocational
15. Dirk Krueger and Krishna B. Kumar (2004), ‘US-Europe Differences in Technology-driven Growth: Quantifying the Role of Education’
16. Ofer Malamud and Cristian Pop-Eleches (2010), ‘General Education Versus Vocational Training: Evidence from an Economy in Transition’

How to Make your Doctoral Research Relevant

Resolving the Crisis in Research by Changing the Game