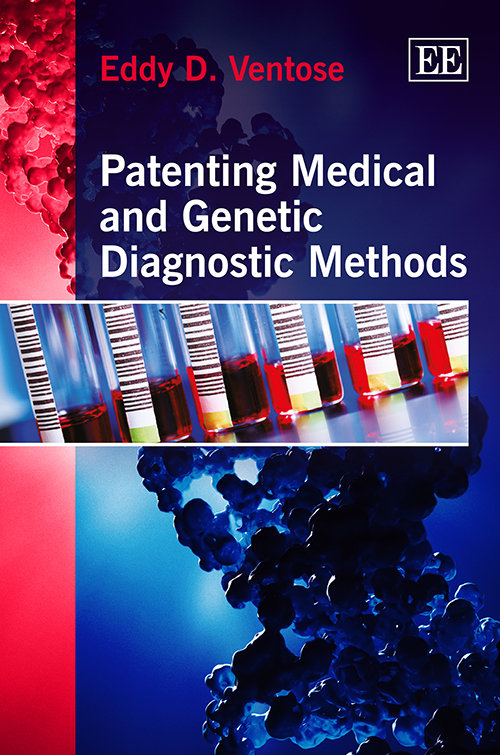 This well-researched book explores in detail the issue of patenting medical and genetic diagnostic methods in the United States.

It examines decisions of the Patent Office Boards of Appeal and the early courts on the question of whether medical treatments were eligible for patent protection under section 101 of the Patents Act. It then traces the legislative history of the Medical Procedures and Affordability Act that provided immunity for physicians from patent infringement suits. After considering the Supreme Court’s jurisprudence on patent eligibility, the book then comprehensively sets out how the Federal Circuit and the Supreme Court have dealt with the issue, paying close attention to the Supreme Court’s recent decision in Bilski and Prometheus.

‘On the heels of his earlier work Medical Patent Law – The Challenges of Medical Treatment, Ventose makes another significant contribution to the literature. In his earlier work, he devoted a chapter to medical patents under US law. In Patenting Medical and Genetic Diagnostic Methods he expands that chapter into an entire text. No easy feat, to be sure. Nonetheless, his “treatment” of the jurisprudential terrain is sophisticated and rigorous. Scholars, practitioners and students seriously interested in the evolution of medical patents under US law will find Ventose’s latest work to be invaluable.’
– Emir Crowne, University of Windsor, Canada, Law Society of Upper Canada and Harold G. Fox Intellectual Property Moot

‘This work provides a timely exploration of patent battles over biotechnology, medicine, diagnostic testing, and pharmacogenomics. Such conflicts are critically important at the dawn of a new era of personalised medicine.’
– Matthew Rimmer, The Australian National University College of Law and ACIPA, Australia

‘The debate on the patent eligibility of diagnostic and medical methods has raged recently in the United States and there seemed to be far less certainty about the outcome than in Europe. Gene patents for diagnostic methods clearly stirred the debate, but this is not a new debate. It goes back a century. This book gets to the bottom of the debate and provides an in depth insight, both of the history and of the recent developments. A fascinating tale. . .’
– Paul Torremans, University of Nottingham, UK

‘For researchers, the tables of cases and of national and international legislation are particularly useful and of course, there’s a host of handy references to be gleaned from the bibliography and the footnotes throughout. For anyone involved in intellectual property, medical law or patents, this book should be considered an essential purchase.’
– Phillip Taylor MBE and Elizabeth Taylor, The Barrister Magazine