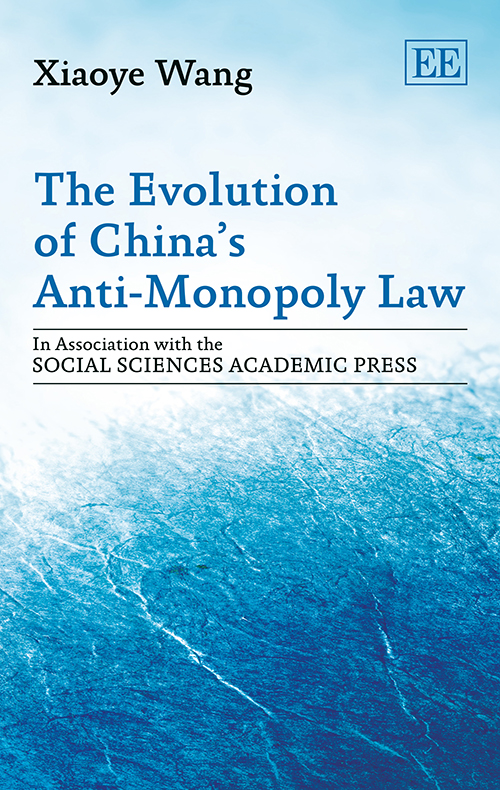 The Evolution of China’s Anti-Monopoly Law

Xiaoye Wang, Professor of Hunan University and Chinese Academy of Social Sciences and Consultative Expert for the Anti-Monopoly Commission under the State Council of the People’s Republic of China

China's Anti-Monopoly Law (AML) is one of the youngest and most influential antitrust laws in the world today. This book aims to provide a better understanding of the evolution of China’s AML to the international community through a collection of essays from the most prominent antitrust scholar in China, Professor Xiaoye Wang.

‘This is an extraordinary collection of essays, most previously available only in Chinese, by the leading world authority on China’s Anti-Monopoly Law. They are necessary reading for a holistic understanding of the law as a unique product of its history, its purposes and foundations, and its early applications. Probably no other scholar could produce such a thoughtful, clear, and both theoretically and practically helpful collection.’
– Eleanor M. Fox, New York University School of Law, US

‘The transformation of a planned economy to a more market oriented economy is among the most challenging tasks of responsible political leadership. China’s move towards a market economy left the outside world in unbelieving wonder. The adoption of an anti-monopoly law is a necessary and particularly difficult part of such a project. An anti-monopoly law interferes with vested political and economic interest. The certainties of plans are gradually substituted by the uncertainties of markets and the vagaries of competition. Such decisions have a constitutional dimension. They would not be possible without profound legal and economic advice by scholars who are prepared to become identified with and argue for the new order. Such a scholar is Prof. Xiaoye Wang. The account of her life indicates the long way she had to travel to become one of the foremost competition law scholars in her own country and on a truly global level. This book highlights her scholarly accomplishments as well as her courage and independence in the service of an effective Chinese Anti Monopoly Law. It has been my good fortune that Professor Wang at the beginning of her career accepted my advice in the preparation of her doctor’s dissertation at the Hamburg Max-Planck-Institute.’
– Ernst-Joachim Mestmäcker, Max Planck Institute for Comparative and International Private Law, Hamburg, Germany

‘The Evolution of China’s Anti-Monopoly Law not only gives the reader a comprehensive overview ranging from the basic theoretical foundations to the detailed lines of argument in important cases, it provides the background knowledge and understanding that is necessary for well-grounded critique and analysis in the area of Chinese anti-monopoly law. The vivid argumentations and explanations mirror the considerable inside knowledge as well as the personal enthusiasm and conviction of the author. For those with an academic or practical focus on China’s Anti-Monopoly Law, this book is a must read.’
– Markus Masseli, Rabels Zeitschrift