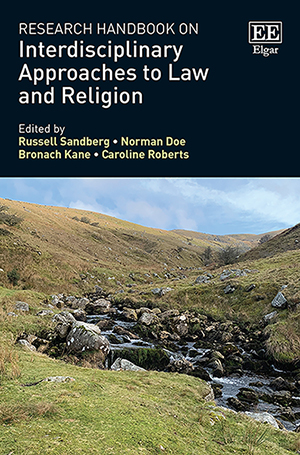 Research Handbook on Interdisciplinary Approaches to Law and Religion

Following 9/11, increased attention has been given to the place of religion in the public sphere. Across the world, Law and Religion has developed as a sub-discipline and scholars have grappled with the meaning and effect of legal texts upon religion. The questions they ask, however, cannot be answered by reference to Law alone therefore their work has increasingly drawn upon work from other disciplines. This Research Handbook assists by providing introductory but provocative essays from experts on a range of concepts, perspectives and theories from other disciplines, which can be used to further Law and Religion scholarship.

‘In the United Kingdom the study of law and religion is now an established sub-discipline with academic legal studies, itself an ever-expanding and ever-more adventurous part of the university. In this book Professor Sandberg and his colleagues from Cardiff University, an acknowledged centre for the study of law and religion, have brought together scholarship from a range of authors, mainly based in or from the United Kingdom, which attests to the vitality and breadth of work being done in the area.’
– Anthony Bradney, Keele University, UK