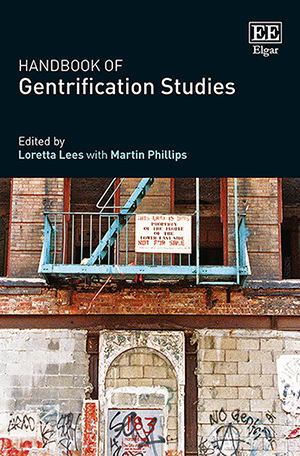 Edited by Loretta Lees and Martin Phillips, Professors of Human Geography, School of Geography, Geology and the Environment, University of Leicester, UK

It is now over 50 years since the term ‘gentrification’ was first coined by the British urbanist Ruth Glass in 1964, in which time gentrification studies has become a subject in its own right. This Handbook, the first ever in gentrification studies, is a critical and authoritative assessment of the field. Although the Handbook does not seek to rehearse the classic literature on gentrification from the 1970s to the 1990s in detail, it is referred to in the new assessments of the field gathered in this volume. The original chapters offer an important dialogue between existing theory and new conceptualisations of gentrification for new times and new places, in many cases offering novel empirical evidence.

‘This excellent, wide-ranging and comprehensive Handbook deals with comparative gentrification theory, key concepts in gentrification, different types and dimensions of gentrification and resistance to gentrification. It includes a wide range of authors and looks at gentrification in a variety of global contexts. All in all, a valuable addition to the literature.’
– Chris Hamnett, King's College London, UK and UESTC, Chengdu, China

‘The Handbook truly is a useful resource for urban scholars and students as it offers well-written entries by established urban scholars and several promising new researchers on various subjects within gentrification research. As such, it provides a wealth of knowledge on the processes and modalities of gentrification, as well as new research agendas on a variety of topics.’
– Wouter van Gent, International Journal of Housing Policy

‘This volume draws on an impressive cast of contributors and embraces a dizzying array of interrelated topics.’
– Dennis E. Gale, Journal of Urban Affairs

‘This Handbook of Gentrification Studies will be useful for graduates studying anthropology of cities, urbanism, geography, and new urban identities. There is no more complete Handbook on gentrification in the English language to date.’
– Yves Laberge, Electronic Green Journal

‘The world’s leading analyst of gentrification convenes an extraordinary team of contributors to map the evolving contours of planetary gentrification. This Handbook is your essential guide to the cosmopolitan cultures of capital that are intensifying the competitive nature of life everywhere on an urbanizing planet — from big cities to small agricultural villages, from the postindustrial consumption landscapes of the Global North to the hybrid hyper-modernities of the Global South and East.’
– Elvin Wyly, The University of British Columbia, Canada

‘The Handbook of Gentrification Studies is useful and informative. It is a good starting point for encountering the variety of debates on the topic of gentrification and its current vexations. It demonstrates clearly the need to think in flexible, cosmopolitan and comparative ways about gentrification, and consider seriously the complicated potential offered by communal resistance to gentrification.’
– Helen Traill, LSE Review of Books