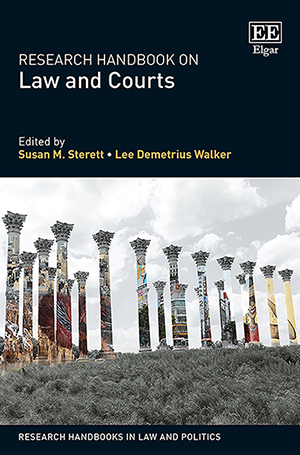 Research Handbook on Law and Courts

Research Handbooks in Law and Politics

The Research Handbook on Law and Courts provides a systematic analysis of new work on courts as governing institutions. Authors consider how courts have taken on regulating fundamental categories of inclusion and exclusion, including citizenship rights. Courts’ centrality to governance is addressed in sections on judicial processes, sub-national courts, and political accountability, all analyzed in multiple legal/political systems. Other chapters turn to analyzing the worldwide push for diversity in staffing courts. Finally, the digitization of records changes both court processes and studying courts. Authors included in the Handbook discuss theoretical, empirical and methodological approaches to studying courts as governing institutions. They also identify promising areas of future research.

‘It's a distinct pleasure to see a research handbook that not only deals with classic themes in the literature, but which marks out new terrain for researchers in many different juridical and political regimes. The section on the digitalization of law and courts research was an eye-opener for me.’
– Chris Hanretty, Royal Holloway, University of London, UK

‘With a timely introduction followed by 32 chapters by no fewer than 50 established and early-career authors working in at least four continents, this Research Handbook represents today's most outstanding, global, and diverse scholarship on law and courts. The Research Handbook on Law and Courts synthesizes new ways that law and courts scholars encounter and study accountability, authoritarianism, populism, citizenship, diversity, democracy, gender, governance, technology, and the transformative potential of rights.’
– Mark Fathi Massoud, University of California, Santa Cruz, US

‘This diverse collection highlights cutting-edge issues in scholarship on law and courts. Integrating comparative and international perspectives with forward-looking attention to technology and gender, there is something for everyone in these pages. Highly recommended.’
– Tom Ginsburg, University of Chicago, US