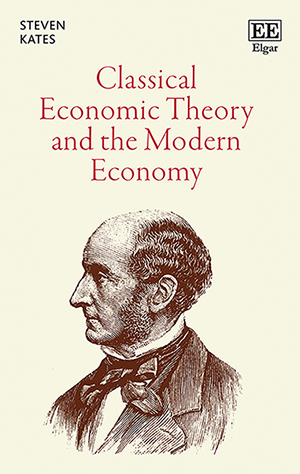 Economic theory reached its zenith of analytical power and depth of understanding in the middle of the nineteenth century among John Stuart Mill and his contemporaries. This book explains what took place in the ensuing Marginal Revolution and Keynesian Revolution that left economists less able to understand how economies operate. It explores the false mythology that has obscured the arguments of classical economists, providing a pathway into the theory they developed.

‘In Classical Economic Theory and the Modern Economy, Kates seeks to correct this dangerous intellectual detour economists took due to Keynes and finally get modern economists to practice economics beyond the shadow of Keynes. It is a Herculean task, but armed with J.B. Say and especially J.S. Mill, Steven Kates makes as strong an effort for resurrection of classical economy theory as can be marshaled. This will be a must read for all students of economics, and a compelling contribution to the history of economic doctrine.’
– Peter Boettke, George Mason University, US

‘This book delivers hard blows to the tenets of modern economics, retells its history and evolution, and pokes holes at our misperceptions of classical economic theory. The result is as much a burial of the macroeconomics of Keynes as it is a resuscitation of the classical economics of J.S. Mill.’
– Per Bylund, Oklahoma State University, US