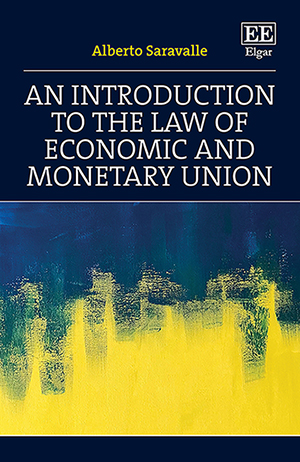 An Introduction to the Law of Economic and Monetary Union

This incisive book is an accessible guide to the laws and policies relating to economic and monetary union (EMU). Providing a rich, multidisciplinary analysis, it combines historical, legal and economic perspectives to offer a detailed understanding of how EMU has developed since its inception and how it works in practice today. This book will be a valuable reference for those teaching and studying advanced courses on EU law, as well as courses that cover the economic history of EU integration.

‘Without any rhetoric or ideological bias toward European integration, and in admirably clear language, the author demonstrates that the European reaction to the Covid epidemic has opened the long precluded way to the autonomous fiscal capacity with adequate resources of the Union. The dreamy goal of the Founding Fathers – an ever closer union between our States – is back, and affects the actual prospects of the future Europe. A book recommended to europhile and eurosceptic readers alike.’
– Giuliano Amato, former Prime Minister of Italy and Vice President of the Convention on the Future of Europe

‘I learned a lot reading this very comprehensive book. I highly recommend it to anyone wanting to (better) understand the complex legal order on which EMU is based.’
– André Sapir, Université Libre de Bruxelles, Belgium