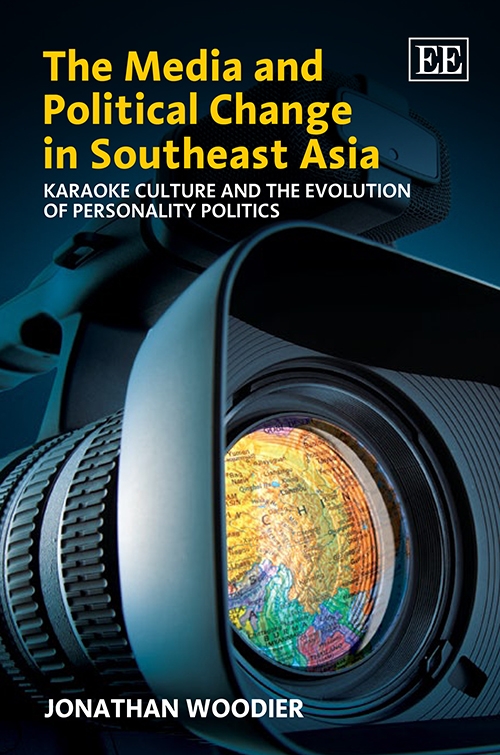 The Media and Political Change in Southeast Asia

Karaoke Culture and the Evolution of Personality Politics

Jonathan Woodier’s latest work considers what impact the media has upon the democratization process in Southeast Asia. Has the media had a liberalizing effect or become subject to elite control in Southeast Asia and, if so, why? What role does the global media play in this process, particularly given its conglomerization and commoditization? By examining the communications media and its relationship to political change in Southeast Asia, this fascinating study will endeavour to provide both a regional comparative analysis and a more balanced interpretation of the mass communication media in the wake of September 11, 2001. The book also investigates the durability of authoritarian regimes and the enduring capacity of the media-controlled state alongside the growing sophistication of political communications – particularly the use of PR consultants.

‘. . . the book is in a comprehensive, readable format. . . the book is logically organised, rich in data and statistics regarding the issues that it covers, as well as accessibly written such that its points would not be lost on the average upper-level undergraduate student with some preparation in Asian studies and the social sciences.’
– Jane M. Ferguson, South East Asia Research

‘. . . a serious academic work that should be on the official reading list of every media studies course.’
– Chris Roberts, Presenter, Sky News

‘Jonathan Woodier has written an excellent book on the politics of media control in Southeast Asia. He shows how political elites in the region are using major events such as the 1997 Asian Financial Crisis and the 2001 September 11 terror attacks as well as innovations in media tools such as public relations and the internet to control information flow to their citizens. This book is a must read for anyone interested in an explanation why Southeast Asian models of authoritarian models are surviving. A brilliant analysis, it combines media theory with a critical discussion of contemporary developments in Asia.’
– James Gomez, Keio University, Japan

‘True to the old Chinese adage “kill a chicken – scare a monkey”, the few who once challenged Southeast Asia’s ruling elites disappeared and the majority were silent. Crude, but effective. Modern times, however, demand a more sophisticated approach. Ruling elites now strip cultures naked and micro manage people’s minds. Their preferred tools of penetration and manipulation are a compliant media and a money hungry PR industry. Jonathan Woodier’s insights will ensure that you will never read a newspaper or watch TV news in quite the same way again.’
– Trevor Watson, Professional Public Relations Pty Ltd, Australia

‘This is an engaging and informative analysis of the media landscape in South East Asia. It uncovers the pervasive impact of the global media on the political process, and raises important academic and policy issues in the process. This book is timely, and will be a must read for policymakers, academics and students across communications, media studies, politics and democratization, as well as for everyone with an interest in current day developments in South East Asia.’
– Joep Cornelissen, Leeds University Business School, UK