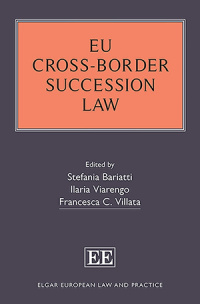 9781785365294 Edward Elgar Publishing
Elgar European Law and Practice series
Edited by Stefania Bariatti, Professor of International Law, Department of Italian and Supranational Public Law, Ilaria Viarengo, Professor of International Law and Francesca C. Villata, Professor of International Law, University of Milan, Italy
Publication Date: June 2022 ISBN: 978 1 78536 529 4 Extent: c 848 pp
With cross-border successions becoming increasingly common in the context of the European Union, this timely book offers a systematic practical analysis of how cross-border successions should be treated, including examination of which courts may establish jurisdiction over succession disputes and which law governs such disputes. Studying cross-border successions in the context of estate planning and in the opening and liquidation of a succession, it examines the specificities of the European Certificate of Succession, contextualising it within its interface with the national laws and practice of EU Member States.

• Practical analysis of the provisions of the EU Succession Regulation

A comprehensive study of EU cross-border succession law with global reach, this book is an invaluable source of reference and guidance for practitioners specialising in estate planning, family law and property law, including judges, notaries, tax specialists and lawyers. Scholars of European succession law and conflict of laws will also find this book’s critical analysis an instrumental tool in their research.