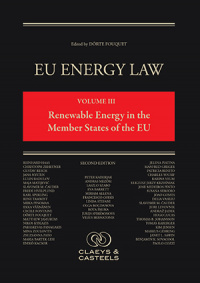 This new book Volume III - Renewable Energy in the Member States of the EU focuses from a broad perspective on the latest development in the EU Member States in the renewable energy sector as well as on energy efficiency. It also describes energy market legislation with a special focus on market design and system integration including support mechanisms, grid access, licensing, planning, auto production, interconnection, network planning and security of supply. It also elaborates on structural fund use within this sector.

Renewable Energy has become a game changer in Europe and on the national energy markets. It has started from fairly low participation in the market in the last decade of the last century, mostly driven by traditional hydro and some bio-mass use, becoming the big winner in new capacity in Europe and worldwide as of to date. Nowadays, access of renewables to the market is being organized differently in the EU 28 Member States with some established patterns such as priority grid access and a majority of countries having used various feed-in mechanisms now, steered by the Directorate General for Competition of the EU Commission towards auctioning systems.

We have seen progress and roll-back, legal and investor certainty or the opposite. More and more, it is no longer so much about market access of renewables but about a new market design. Incumbent energy production becomes the obstacle for system change. The coming decade until 2030 will have further barriers to jump but the pathway towards sustainability is set, with different speed restrictions in the various Member States. A look over the big pond to the United States gives further fruitful insight.