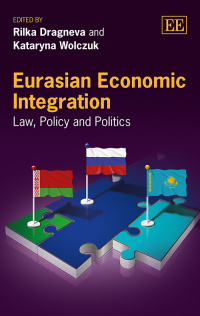 The contributors seek to explain this puzzling and politically significant development by examining the ECU’s origins, institutional architecture, key driving forces and emerging implications. Their investigation reveals that the ECU is an ambitious and fast moving project in deep economic integration, yet its legal design is complex and member states are driven by a precarious balance of diverse motives. Nevertheless, as the contributions to the volume indicate, the emergence of the ECU already carries important external implications, especially for the EU’s strategy in the post-Soviet space.

Being the first comprehensive and systematic study of the new Eurasian economic integration regime, this book will appeal to academics and students of regional integration, international relations and international law, Russian studies, Post-Soviet politics, as well as Central Asian studies.
Critical Acclaim
‘Eurasian Economic Integration has arrived at just the right time. The Asia-Europe economic region is undergoing major changes. With the strengthening of the Chinese economy and the crisis with the euro, the economic balance is shifting. Meanwhile, questions about the future of the economies in the post-Soviet region are arising. The new order now being attempted under Russia’s leadership could take on considerably more significance. Kataryna Wolczuk and Rilka Dragneva have brought together a first-class team of experts who are investigating these developments. As a result, we now have a study describing the Eurasian structures currently taking shape and their consequences for the countries involved, the WTO and neighbouring countries in the East and West. This precise and timely study upholds high standards of scholarship and offers political actors an excellent analysis, which will enable them to adapt European policy to the processes playing out in Eurasia.’
– Henning Schröder, Stiftung Wissenschaft und Politik, Berlin, Institute for East-European Studies, Free University Berlin, Germany

‘This book spectacularly delivers on what it promises, providing a comprehensive, clearly structured and theoretically informed study of the latest round of integration efforts in post-Soviet Eurasia. Bringing together an impressive range of contributors, each of whom is a notable expert in their field, this will undoubtedly become a classic path-breaking study of regionalism in a part of the world that is unjustly neglected.’
– Richard Sakwa, University of Kent, UK

PART I: LEGAL AND INSTITUTIONAL FRAMEWORK OF THE ECU
2. The Development of Eurasian Economic Integration
Julian Cooper

3. The Legal and Institutional Dimensions of the Eurasian Customs Union
Rilka Dragneva

4. Russia, the Eurasian Customs Union and the WTO
Richard Connolly

PART II: THE ECU AS VIEWED FROM THE MEMBER STATES
5. Russia and the Eurasian Customs Union
Julian Cooper

7. Belarus: Player and Pawn in the Integration Game
Matthew Frear

PART III: THE ECU AND ITS RAMIFICATIONS FOR THE EUROPEAN UNION
9. The Impact of the Eurasian Customs Union on EU–Russia Relations
Hiski Haukkala

Appendix 1. Regional Integration Initiatives and Organizations in the Post-Soviet Space

Appendix 2. Post-Soviet Countries’ Applications and Accessions to the WTO