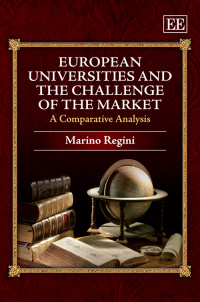 European Universities and the Challenge of the Market

9781849804035 Edward Elgar Publishing
Marino Regini, University of Milan, Italy
Publication Date: 2011 ISBN: 978 1 84980 403 5 Extent: 256 pp
This major volume sheds light on the changing relationship between higher education and the economy in the major European nations. It is the outcome of extensive comparative research on higher education institutions and the economy in six European regions that were specifically chosen due to their similarities in terms of economic development: the English North West, Hesse in Germany, Rhone-Alpes in France, Lombardy in Italy, Catalunyia in Spain and the Netherlands. This unique comparative nature allows the authors to draw out the variations between regions and identify institutional differences.

Critical Acclaim
Contributors
Contents
Critical Acclaim
‘. . . there is a useful assemblage of information about the state of higher education systems in six major European countries and some interesting analyses of similarities and differences between them. I have benefited from reading it and would recommend it as introductory reading for masters and research students.’
– Gareth Williams, London Review of Education

‘The book presents exciting comparative perspectives: how Italian scholars perceive and assess links between higher education and the economy. In-depth information is provided on issues not well documented in the past, e.g. the involvement of external actors in curriculum design, career services for students and links between governance and funding. The Milano-based team of scholars convincingly interpret the opportunities and problems of higher education reforms aiming to position higher education in the knowledge society.’
– Ulrich Teichler, University of Kassel, Germany

‘European Universities and the Challenge of the Market by Marino Regini offers a timely, refreshing and well-researched account of one of the most important changes in European (and other) higher education – the rise of competition and the market as key policy drivers. This is a global template whose diffusion and domestications are hugely important for higher education policy research and Regini’s book begins lucidly and insightfully to fill in longstanding gaps for us. Just as crucially the book provides valuable material on both the convergences and divergences we find increasingly between globally-situated higher education states.’
– Roger King, Open University and London School of Economics, UK

‘UK academics are frequently exhorted to integrate a European (and global) perspective into their syllabuses, especially where their students are drawn from a wide variety of national backgrounds. But this is difficult when there is a dearth of detailed, accessible contemporary accounts of national practices elsewhere. This edited book goes a very long way to help them. It offers detailed, rigorously researched descriptions of the nature and effects on higher education of its “marketisation” – descriptions rooted in robust theoretical and conceptual frameworks which help the reader situate the descriptions in their own context.’
– Paul Trowler, Lancaster University, UK
Contributors
With contributions from: Gabriele Ballarino, Sabrina Colombo, Loris Perotti and Renata Semenza
Contents
Contents:

2. The Reorganization of Research
Sabrina Colombo

5. The Challenge of the Market
Marino Regini

Handbook of Teaching and Learning at Business Schools