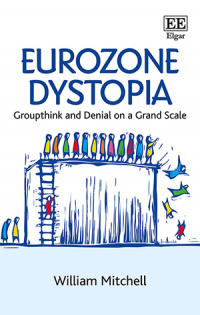 Groupthink and Denial on a Grand Scale

9781784716653 Edward Elgar Publishing
William Mitchell, Professor of Economics, Centre of Full Employment and Equity, University of Newcastle, Australia
Publication Date: 2015 ISBN: 978 1 78471 665 3 Extent: 520 pp
Eurozone Dystopia traces the origin of the Eurozone and shows how the historical Franco-German rivalry combined with the growing dominance of neo-liberal economic thinking to create a monetary system that is deeply flawed and destined to fail. It argues that the political class in Europe is trapped in a destructive groupthink which prevents it from seeing their own policy failures. Millions are unemployed as a result and the member states are caught in a cycle of persistent stagnation and rising social instability.

More Information
Contributors
Contents
More Information
Eurozone Dystopia traces the origin of the Eurozone and shows how the historical Franco-German rivalry combined with the growing dominance of neo-liberal economic thinking to create a monetary system that was deeply flawed and destined to fail. William Mitchell argues that the political class in Europe is trapped in a destructive groupthink. Based on a flawed understanding of macroeconomic fundamentals, groupthink extols the virtues of the erroneous concept of the self-regulating free market and prevents Europe from seeing its own policy failures. As a result, millions are unemployed, with imperilled member states caught in a cycle of persistent stagnation and rising social instability.

Contents
Contents: 1. Introduction PART I THE EARLY YEARS 2. Early Attempts at Monetary Union and the Hague Summit 3. The Werner Report and the Collapse of Bretton Woods 4. The ‘Snake in the Tunnel’ Reappears 5. Monetarism Arrives Amidst Currency Turmoil 6. The Delors Report 7. Onward to Maastricht 8. The Maastricht Treaty 9. Converging to Crisis and Austerity 10. The Ideological Straitjacket 11. The Stability and Growth Pact (SGP) 12. The Convergence Farce: Smokescreens and Denial PART II THE PATH TO CRISIS 13. The First Few Years: Smug Self Congratulation and Mass Delusion 14. The 2003 Fiscal Crisis 15. The German “Jobwunder” 16. European Groupthink: Denial on a Grand Scale PART III THE OPTIONS FOR EUROPE 17. A Monetary Framework for Fiscal Policy Activism 18. Framing the Debate - Two Alternative Visions of the Economy 19. The Basic Principles of Functional Finance 20. The Federal Solution 21. Overt Monetary Financing 22. Abandoning the Euro 23. Employment Guarantees References Index
Add to Wish List
eBook for individuals
978 1 78471 666 0
From £37.56
Click here for options
eBook for library purchase
978 1 78471 666 0
View sample chapter and check access on: