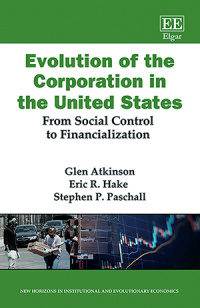 From Social Control to Financialization

More Information
Critical Acclaim
Contents
More Information
This insightful book traces the evolution of corporate power in the United States, from social control over corporate power under early state laws to the modern liberation of the corporation serving primarily private purposes. It illustrates how the transition of attitudes towards corporations and dynamic changes in public policy have ushered in an age of financial fragility, income inequality and macroeconomic instability.

The book employs an evolutionary methodology to consider the role of the corporation in the US economy, and how that role as a tool for public purposes, defined by special charters, changed with the widening of markets and increasing industrial capacity for mass production. Evaluating the stages of capitalist development, chapters demonstrate how the co-evolution of law, economics and finance altered economic organization, leading to the evolution of core economic concepts such as capital, income and resources. The book examines the transition of corporate purpose towards generating wealth and enhancing profits in the early twentieth century and analyzes recent trends through illuminating case studies in financialization. It concludes with crucial insights into the future of the corporation, offering potential pathways for economists to intervene and address the systemic problems that are endemic to the modern financial era.

A rousing and provocative call to arms for modern economists, this book is key reading for scholars and researchers of economics, particularly those focusing on the evolution of economic and business institutions and its impact on the social fabric of the US. Practitioners and policy makers will also benefit from its empirical perspectives on financialization.

Critical Acclaim
‘Evolution of the Corporation in the United States is essential reading on today’s corporations. Combining economics, law, and finance, it demonstrates how corporations evolved from serving the public interest to advancing the private interest of financial elites. Anyone aiming to fashion an agenda for economic reform must begin with this book.’
– Charles J. Whalen, University at Buffalo - SUNY, US
Contents
Contents: 1. Financialization and the corporation in the twenty-first century 2. Capitalist development 3. Widening of the market and the transition from scarcity to abundance 4. Role of the corporation 5. Failure of federal policy to achieve social control 6. Corporations and finance 7. Case studies in financialization 8. Creating the path forward by social control References List of cases Index
Add to Wish List
eBook for individuals
978 1 78990 496 3
From £25.00
Click here for options
eBook for library purchase
978 1 78990 496 3
View sample chapter and check access on: