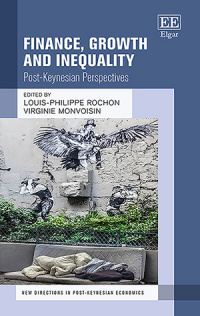 9781788973687 Edward Elgar Publishing
New Directions in Post-Keynesian Economics series
Edited by Louis-Philippe Rochon, Full Professor, Laurentian University, Canada, Editor-in-Chief, Review of Political Economy and Founding Editor Emeritus, Review of Keynesian Economics and Virginie Monvoisin, Associate Professor, Grenoble Ecole de Management, France
Publication Date: 2019 ISBN: 978 1 78897 368 7 Extent: 328 pp
This book brings together some leading and emerging scholars who bring an alternative view on some of the most pressing issues of today. In addition to key concepts in post-Keynesian and heterodox economics, the authors also explore financialization, debt, income distribution, and policies, and the emerging threat of dualism. Policy makers and scholars alike will find the book a much need addition to the field.

More Information
Critical Acclaim
Contributors
Contents
More Information
This book introduces readers to some key concepts in post-Keynesian and heterodox economics, in particular the importance of finance in relation to income distribution and growth. The book explores various aspects of financialization, such as its role in pension funds, and explores its consequences especially in developing economies.

Readers will recognize other key concepts such as the role of banks, and the effectiveness of monetary policy and its transmission mechanism, and unconventional policies, such as quantitative easing. Considerable space is given to income inequality, a topic that has become increasingly important. Authors explore the growing importance of household debt, and policies that could address inequality. Finally, the book discusses the rising importance of dualism, a much under-researched topic in heterodox economics.

PART I POST-KEYNESIAN VIEWS ON FINANCE AND FINANCIALIZATION
1. Measuring finance for the economy and finance for finance
Marcello Spanò

4. Financialization and bancarization of Argentina, Brazil and Mexico: the financial services transformations as from the post-crisis period
Alicia Girón and Marcia Solorza

6. How can policy tackle inequality in 21st century?
Hanna Szymborska

PART III POST-KEYNESIAN VIEWS ON Monetary Policy
9. The transmission of monetary policy in the US: Testing the credit channel and the role of endogenous money
Nathan Perry and Carlos Schönerwald

14. Do the robots come to liberate us or to deepen our inequality? The uncertain macrostructural foundations of the robotic age
Arpita Bhattacharjee and Gary Dymski