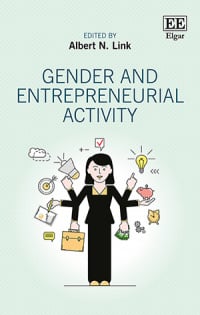 9781785364730 Edward Elgar Publishing
Edited by Albert N. Link, Virginia Batte Phillips Distinguished Professor, University of North Carolina at Greensboro, US
Publication Date: 2017 ISBN: 978 1 78536 473 0 Extent: 328 pp
There is growing interest in the relationship between gender and entrepreneurial activity. In this book, 37 eminent scholars from diverse academic disciplines contribute cutting-edge research that addresses, from a gender perspective, three general areas of importance: key characteristics of entrepreneurs, key performance attributes of entrepreneurial firms, and the role of financial capital in the establishment and growth of entrepreneurial firms.

Each chapter focuses on original, burgeoning themes related to gender and entrepreneurship, with forward-looking research that highlights key findings. For example, some authors show how the so-called ‘gender divide’ in patenting is greater than in publishing for academic entrepreneurs. Others explore the corruption in business practices, which is less for women entrepreneurs than their male counterparts, and explain why gender diversity is higher in equity crowdfunding than in other entrepreneurial finance markets. The book takes a global approach, offering examples of entrepreneurs from around the world.

Scholars and students interested in entrepreneurship and the role of gender in business will find this volume informative and eye opening.

Critical Acclaim
‘Gender and Entrepreneurial Activity is comprised of twelve articles of seminal scholarship that will prove to be of immense interest to scholars and students with an interest in entrepreneurship and the role of gender in business. As informed and informative as it is thoughtful and thought-provoking, Gender and Entrepreneurial Activity is recognized as a critically important and ground-breaking core addition to both college and university library contemporary economics collections in general, and gender studies supplemental reading lists in particular.’
– Midwest Book Review

2. The Psychology of the Entrepreneur and the Gender Gap in Entrepreneurship
Olga Bentsson, Tino Sanandaji and Magnus Johannesson

A Research Agenda for the Entrepreneurial University

Entrepreneurship in Theory and Practice