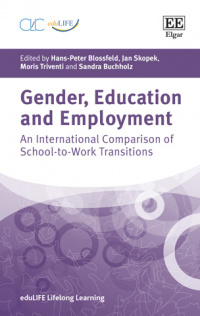 An International Comparison of School-to-Work Transitions

More Information
Critical Acclaim
Contributors
Contents
More Information
For much of the twentieth century, women lagged considerably behind men in their educational attainment. However, in recent decades, young women have become an important source of human capital for labor markets in modern societies, as well as potential competitors to the male workforce. This book asks whether or not women have been able to convert their educational success into gains on the labor market.

The expert contributors address the topic on a comparative level with discussions centred on gendered school-to-work transitions and gendered labor market outcomes. Thereafter they analyze the country-specific implications of the gender redress from a wide range of countries including the USA, Russia and Australia.

This enlightening book will appeal to graduates and postgraduates studying social policy, education, the labor market, inequality and gender. It will also be of interest to experts in the fields of sociology, education, political science and economics and those interested in educational research.

Critical Acclaim
‘Gender, Education and Employment: An International Comparison of School-to-Work Transitions teaches us a tremendous amount about the state of gender inequalities at labor market entry across countries. Overall, the comprehensive research presented is relevant in both theoretical and applied contexts, and this text will appeal to students and experts in the fields of education, sociology, gender studies, social policy, political science, and economics.​‘
– Jaya Soni, International Social Science Review​

‘The value of this book is the rich and highly informative account of variations regarding gender differences at labour market entry across different industrialized countries, and the use of longitudinal data. Hans-Peter Blossfeld and his first-class team bring to the fore how gender differences arise at the transition from school-to-work, and to what extent women are able to convert their educational attainment in labor market positions. Bringing together evidence from across countries, readers will come to understand the crucial role of institutional structures in shaping gender inequalities in life course transitions.’
– Ingrid Schoon, UCL Institute of Education, UK

‘This volume provides essential reading for anyone interested in the relation between men and women in the labour market. By concentrating on the crucial transition from school to work in a large number of countries, the authors investigate to what extent the increased female advantage in education is converted into advantage in occupational attainment. By comparing countries, which differ in terms of educational and labour market organisation, the authors show how the opportunities of women and men vary – sometimes in unexpected ways.’
– Robert Erikson, Stockholm University, Sweden

PART III COUNTRY-SPECIFIC CONTRIBUTIONS
4. The Influence of Gender on Pathways Into the Labor Market: Evidence From Australia
Sandra Buchler and A. Michael Dockery

5. Gender Differences in Labor Market Entry and Their Long-Term Consequences in the United States
Susanne Schührer, David B. Bills, and Felix Weiss